Out of the Deep I Cry by Julia Spencer-Fleming 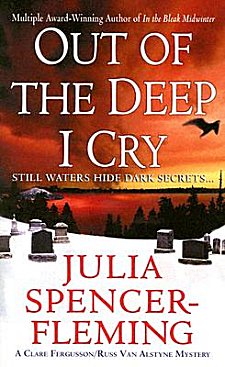 First Line: Russ Van Alstyne had just gotten a tug on his line when he saw the old lady get up from between the headstones she had been trimming, lay down her gardening tools, and walk into the reservoir.

A section of the St. Alban's Episcopal Church roof is ready to collapse, and the chances of getting it repaired look bleak until Mrs. Marshall decides to break the trust created by her mother. Instead of helping to fund the free clinic, the money from the trust will allow St. Alban's costly repairs to be done.

Losing a bit of its funding turns out to be the least of the troubles facing the Millers Kill Free Clinic because its doctor goes missing and a local woman seems to be the best suspect in town. Reverend Clare Fergusson finds herself investigating Dr. Rouse's disappearance alongside Chief of Police Russ Van Alstyne. What Clare and Russ don't realize is just how helpful Clare's volunteer work at the historical society is going to be. This case has long roots that go all the way back to the Prohibition era, and it's going to take everything Clare and Russ have got to untangle them to get at the truth.

I do love books that combine a current mystery with one that occurred in the past, and Julia Spencer-Fleming has created a marvelous one here. Chapters take the reader back to the 1930s when Mrs. Marshall's father disappeared without a trace, to the 1950s when her mother created the trust for the clinic, and even to 1970 when the young Russ Van Alstyne has his very first brush with the mystery.

Once again the author leads us through life in a small town. To those of us who have lived in one, it will seem as though we've gone home for a visit. To those who haven't, they can see it through the eyes of the Reverend Clare Fergusson, who, as a newcomer, is a rank amateur when it comes to dealing with a village gossip mill. The importance of a small town clinic is also outlined by showing us what happens when its doctor goes missing, and by how and why a local woman can campaign against having children receive immunizations to prevent disease.

When all was revealed at the end, I had to shake my head. All the clues were there, but I was so engrossed with the story and its characters that I didn't even think to tease out those threads of clues so that I could ponder them. If you like your books to be character rich, then you have to read these books by Julia Spencer-Fleming. Clare (a priest) and Russ (a married man) are two of the best characters in crime fiction, and the fact that they are two honorable people falling deeply in love with each other adds an extraordinary poignancy to each book.

Yes, these books can be read as standalones, but I would strongly advise against reading them as such. Yes, the stories are exceptional, but characters like Clare and Russ are like the rarest of pearls. You're going to want to collect them all.