The Flesh Tailor by Kate Ellis 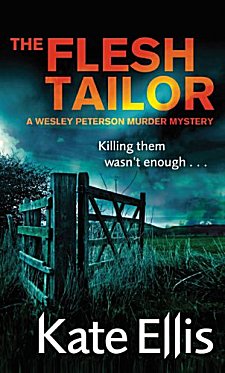 Once again Kate Ellis has written a wonderful blend of new and ancient mysteries occurring in the south of England. Dr. James Dalcott is found shot dead in his cottage, and when Detective Inspector Wesley Peterson begins piecing together the facts of the victim's life, he finds the well-liked doctor had been hiding some very strange family secrets.

While Peterson is working on the Dalcott murder, archaeologist Neil Watson has been called out to Tailors Court-- a property that dates back to Elizabethan times-- where six skeletons have been found. Watson finds that the skeletons show signs of dissection and may be linked to tales of sixteenth-century body snatching. However, one more skeleton is found-- that of the body of a young child buried with a toy car and a coin dating from the 1930s. Watson's investigation has taken an even more sinister turn from the days of Queen Elizabeth to the time of children evacuated from London during World War II. Could there possibly be a connection between the murdered doctor and the skeletons of Tailors Court?

If you've ever read a Wesley Peterson mystery written by Kate Ellis, you know there is a connection between the new mystery and the old, and the delight is in trying to discover the connection before the author reveals it. Now through fourteen books in this series, the main characters feel like well-loved members of my family, and I look forward to reading about what's happened to them as much as I enjoy the murder investigations.

The Flesh Tailor is particularly engaging because of the three separate cases. The present-day case concerning the execution-style murder of the doctor is truly puzzling, and learning about the history of an old house has always been a favorite past time of mine. Tailors Court and its Elizabethan occupant do not disappoint. When Ellis introduces the memories of a wartime evacuee who experienced Tailors Court as a child, my interest and my level of enjoyment moved up another notch or three. The quality of Ellis's Wesley Peterson mysteries is consistently high, but The Flesh Tailor is one of the best of the series. If you love mysteries that blend excellent characterization with the police procedural and strong dashes of archaeology and history, this series will most definitely be your cup of tea. Curl up with one and find out!