@ The Poisoned Pen with Sharan Newman

If you're a lover of historical mysteries and haven't heard of Sharan Newman, I urge you to get your hands on her books. I've been a fan of her Catherine LeVendeur series for a long time. Sharan has created wonderful characters living in France during the time of Héloïse and Abélard, and it is wonderful to be able to read and enjoy historically accurate mysteries without being hit over the head by the author's knowledge.

As usual I arrived at The Poisoned Pen early, bought a book or two, had a nice chat with two of the employees, and then took my seat to read. Owner Barbara Peters also arrived early, and I have to admit that I paid more attention to what she was saying up front at the cash register than I was to my book. For example, there was a discussion about season three of "Downton Abbey" as well as Barbara's comment that she had to email one of the authors she edits to tell him that he'd killed the wrong character in his latest manuscript. (See what I mean about the benefits of showing up early?)

When Sharan Newman arrived, it didn't take long for me to realize that she wasn't feeling her best, and I overheard her saying that she was just getting over a cold. (By  now you must think that I show up early to author signings to sit there with my eyes on stalks and my ears stretched out to the size of an elephant's!)

Several representatives from Bagwyn Books also showed up early because Sharan's latest book, Death Before Compline, was the very first to be published under that imprint. The tables they set up gave the entire proceeding a party atmosphere. (Bagwyn Books is overseen by the Arizona Center for Medieval and Renaissance Studies and is focused on publishing historically accurate fiction.)

"Catherine is no Sister Cadfael." 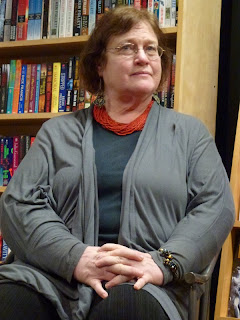 Newman's Catherine LeVendeur mysteries all grew out of her doctoral thesis work. The character begins her fictional life as a novice in Héloïse's convent, but there was never any intention to turn her into "Sister Cadfael." Catherine does leave the convent and gets to travel Europe solving crime. With her background as a nun and having a Jewish father who was forcibly raised as a Christian, many people may be leery of these books as being overly religious. They're not. Newman focuses on the social and political dynamics of the era  instead.

Barbara Peters, friends with Sharan Newman for over twenty years, said, "One of the reasons why I enjoy these books so much is because of all the traveling they do. You really get a feel for how Europeans lived during this time period."

"I lived off Dan Brown for three years."

When The DaVinci Code was published, there was a hue and cry over all the historical inaccuracies in the book. Sharan was doing a wee bit of huing and crying herself.  Barbara Peters listened and then asked, "Why don't you write the real history?" Sharan began writing, and when her book was finished, it took Berkley two days to put in a pre-emptive strike bid against six other publishers. Catherine LeVendeur was on her way.

Sharan had us all laughing when she described Dan Brown's French publisher: "He's so gorgeous silkworms line up to make his suits." It certainly makes me want to see the man-- how about you?

Even though The DaVinci Code is riddled with inaccuracies, it has done one very wonderful thing: the book boosted tourism to many places to such a degree that desperately needed restorations could at last be done. As Sharan and Barbara both said, it's thanks to people like Dan Brown that we're able to restore our heritage.

"I steal my ideas from dead people."

At one point, Barbara asked Sharan where she got her information on how people lived from day to day in medieval times. "Sermons are an excellent source," Sharan replied. "The Sermons of St. Bernard... he loved analogies and did an entire sermon on dung! And someone else wrote a sermon that was centered around bread." Those stuffy old sermons are filled with historical details!

At one point, Sharan mentioned shopping at Shop N Kart, "which probably sounds tacky, but they have a nice organic section. You can buy the sage there to cleanse your house..."

"...after the murder!" Barbara quipped.

When we stopped laughing at that, someone in the audience had a question about translations of Sharan's books which led to some little known facts about the job of a translator.

Did you know that translators are paid by the word, and that they do not receive royalties? It's true!

And... did you know that the translator's name on Stieg Larsson's books is a pseudonym? It's true. A publisher in the UK made so  many changes to the translator's work that he refused to put his name on it, thus the fake name. I don't blame him!

If you've gotten the idea that we all had a lot of fun at The Poisoned Pen that night, you'd be right. The evening ended all too soon, but I certainly did enjoy learning more about the creator of one of my favorite mystery series!