The Christmas Card That Reminds Me of So Much Love 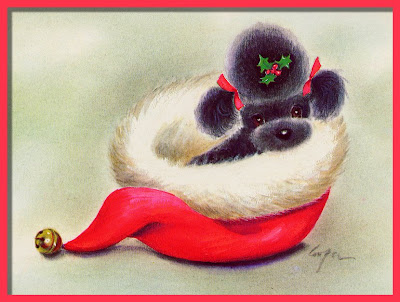 It's just plain fun to do something a little nuts during the holidays, isn't it? I happened to be going through Christmas artwork that I'd saved on my hard drive this evening and came across the graphic you see above. It's probably my all-time favorite Christmas card, and I scanned it several years ago. Naturally there's a story behind it.

The best non-human friend I've ever had in my life was a black toy poodle I named Jeremy after Jeremy Bolt in an old TV series called "Here Come the Brides." Jeremy might have weighed three pounds soaking wet, and for sixteen years we had all sorts of adventures together. Mom learned quickly that if she wanted to take a picture of her in-front-of-the-camera loathing daughter, all she had to say was, "Hold Jeremy for a minute. I want to take his picture."

Jeremy was a character. Mom knitted him an entire wardrobe of turtleneck sweaters, which he wore with great style and panache. That dog had to have had at least three dozen sweaters in a veritable rainbow of colors. I had a coat with a big raccoon collar that I loved to wear. (Don't throw paint on me, this was back in the early 1970s.) Lordy, that coat was warm during frigid winters in central Illinois! Jeremy fit neatly down the front of that coat, and I'd take him shopping with me in downtown Decatur. In and out of stores we'd go, and no one would even know he was there unless they looked very carefully and happened to see a small black nose sticking out of my big furry collar.

Like I said, Jeremy and I had all sorts of adventures that ranged from traveling across the country, going horseback riding, chasing ducks, windstorms, and even a house fire. (Yes, it's an abbreviated list, but I could write a book about this dog.) Although Jeremy cared for no one but me, he was a great favorite with all our family, friends, and even mere acquaintances, and Mom and I were constantly asked, "What's Jeremy been up to lately?" Which leads to the crazy thing I did one Christmas.

Jeremy and I were on a shopping expedition in Decatur one snowy evening. I was scouting for Christmas cards in my favorite shop, Haines and Essick's, when one particular box practically jumped off the shelf and hit me upside the head. Yes, you guessed it-- it was a box of cards like the one you've already seen at the top of this post. The pup on the card was a dead ringer for Jeremy when he was the same age. I found the cards I was looking for, and I bought a box of "Christmas Pup" cards.

When I got home, I showed the box of cards to Mom. She looked at me. I looked at her. We both looked at Jeremy. We grinned at each other at the exact same time and said-- in stereo-- "Jeremy's sending Christmas cards this year!" And he did. Each one was personally signed with his paw print and sent to his biggest fans. We got more reactions from Jeremy's cards than we ever did with our own.

And that's why I will always cherish this particular Christmas card. It reminds me that I should always do at least one crazy thing each Christmas. It reminds me of the many people who appreciated what a special little guy my best buddy was. And it reminds me of the sixteen years of unconditional love I was given by a small bundle of fur named Jeremy.
by Cathy at Wednesday, December 05, 2012