A Simple Murder by Eleanor Kuhns 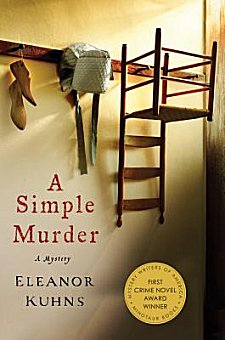 First Line: By late afternoon William Rees was past Rumford and heading southeast, almost to Durham and the coast.

It's Maine in 1795, and traveling weaver William Rees has come to Durham to find his son David. Five years ago Rees loaded his loom in his wagon and set off for a nomadic life after the death of his beloved wife Dolly. Now he's discovered that his sister and brother-in-law have treated David worse than the hired help, and David has run away to the Shaker community of Zion, outside Durham.

As a traveling weaver, Rees has always been an outsider with a knack for solving the various  crimes with which he comes in contact. When he's asked to look into the death of Sister Charity in the Zion community, Rees accepts. The time spent in the area will give him a chance to finish a local weaving commission and to spend time with his son. What he doesn't count on is how very complicated the death of the young Shaker woman will turn out to be... or how attracted he'll become to another woman living nearby.

Kuhns does an excellent job of portraying the era and the Shaker religion without being heavy handed. She also doesn't use the common speech of the day, opting instead for plain modern speech. This may not give the full flavor of the era, but since modern slang isn't used either, it's not jarring and the meaning is always clear.

Another thing I appreciated was a bit more subjective. Rees is constantly having to hitch up his horse and wagon and race off to some village or farm, often spending hours holding reins and seated on a rigid board. This isn't anything different than many other characters in other historical mysteries I've read, but in this book, when Rees gets a chance to stop and get down from the wagon, his body is full of aches and pains-- as it should be. (After all, he didn't just travel in an air-conditioned Lincoln Town Car on a paved road!) In just that one small detail, the author won a fan.

The plot is a complicated one that I solved at just about the same speed as the main character, which is another good thing. I know I'm not Sherlock Holmes, so if I start figuring out too many mysteries in their early stages, I know something's wrong.

The characters are where author Eleanor Kuhns really shines. Rees is a grieving man who made a mistake when he gave his young son to someone else to raise. He's learned how wrong he was, and he's determined to make amends-- which might not be as easy as he thinks with a young teenage boy. Rees has also become attracted to Lydia Jane Farrell, a young woman living in a small house on the Zion property who's brought in to help Rees interview the Shaker women. Lydia is fiercely independent, opinionated, and full of her own secrets, and it's not long before Rees finds it difficult indeed to stay away from her.

The Shaker religion is a fascinating one, and the author portrays it in an honest yet sympathetic light. The Shakers believed "Hands to work, Hearts to God" but they were really no different from any other group of humans living together-- bundles of strengths and weaknesses, sometimes in tandem, sometimes at cross purposes.

Since William Rees is a weaver who's gone from Georgia all the way up to Maine and shows no signs of wanting to stop, I look forward to reading more of his efforts in crime solving... as well as his developing relationships with his son and with Lydia.