Instruments of Darkness by Imogen Robertson 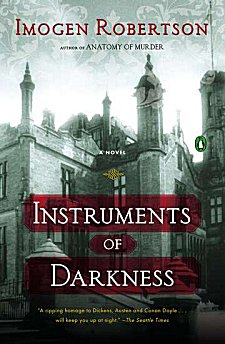 If Crowther had known what was in store for him, he just might have pulled the covers back over his head. Harriet Westerman, the unconventional mistress of Caveley Park, has found a dead man on her property, and she insists that reclusive anatomist Gabriel Crowther help her find the killer. Their search will take them from country walks to drawing rooms to grimy London streets to dissecting rooms, and by the time they're done, there will be no more secrets at neighboring Thornleigh Hall.

Harriet Westerman is the kind of amateur sleuth that I want to know more about. The wife of a sea captain, Harriet went to sea with her husband during peace time and in war-- and she misses it. The only reason why she's taken up residence at Caveley Park is because her husband has always wanted a big house and property. If left to her own devices, she'd still be at sea.

Gabriel Crowther on the other hand is an anatomist, which isn't a very popular occupation in eighteenth century England. He prefers solitude for many reasons, only one of which concerns his work. Having removed himself from polite society, he finds himself out of step when Harriet drags him back into it.  This pair of self-appointed sleuths both have courage and razor-sharp minds, which bodes well for a series.

However, the author has also populated the book with several other well-drawn and memorable characters, one group of which is chased through the dark streets of London by a very scary murderer. Whether trying to track down the notes of a magistrate or attempting to protect the next people on the killer's list, I never knew when I'd run into another of the author's marvelous characters.

The only thing that kept me from raising this book to the ceiling and shouting, "Hallelujah!" is that the pace tended to be glacial until the last quarter of the book. But Robertson has now set up a world that I want to revisit again and again. Mrs. Westerman? Please set another place at dinner. I am coming to dine!

Historical Mystery, #1 Crowther and Westerman mystery
Rating: A-
Source: Purchased at The Poisoned Pen.
by Cathy at Sunday, December 23, 2012