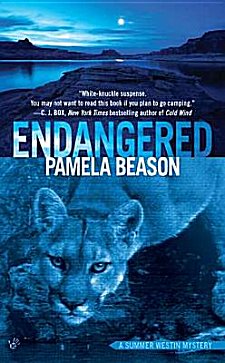 First Line: It was almost time.

Wildlife biologist and freelance writer Summer Westin is on assignment in southern Utah for the Save the Wilderness Fund. As she's about to hike out to her camp, she hears a mother calling for her child and has a little boy run into her, but before she can do anything, the little boy runs toward a man on the other side of the trees. Assuming the man is the child's father, she waves, the man waves back, and Summer heads out for her camp.

She arrives in time to take once-in-a-lifetime photos of a female cougar and her cub walking out across Rainbow Bridge. Having all the latest portable technology, she uploads her photos and her article to SWF and calls it a night. Returning to town the next day, she's stunned when she learns that the little boy has gone missing and is presumed to be the victim of a cougar attack. The news media has swarmed over the story and is inciting every nut with a gun to show up and blast holes in the killer cougars.

Knowing the cougars had nothing to do with it, Summer is in a race with the clock before the government sends in trained shooters to track down the big cats. Getting in her way at every turn is FBI agent Chase Perez, and Perez hopes the cougars are at fault-- because the alternative could be a whole lot worse.

As soon as Summer took those photos of the cougars at Rainbow Bridge, I had a huge smile on my face. For years, I've loved Nevada Barr's Anna Pigeon series, not only for Anna herself, but for the National Park settings and the wildlife. Now here is Summer Westin, a woman who carries a camera instead of a gun, and she likes to get out in the middle of nowhere to observe wildlife.  I'm in heaven!

Beason also provides romantic interest in FBI agent Chase Perez. Normally I prefer my crime fiction sans romance, but Beason hits just the right note with hers, and the sparks between Summer and Chase add to the story rather than detract from it.

This is pretty much a two-person show, but two secondary characters-- both rangers in the park-- perform admirably and show just how dangerous it can be to be a solitary ranger facing a motley assortment of park visitors. And if you like excitement along with wilderness and wildlife, you're going to love the tour of caves in a rainstorm that the author supplies. I couldn't read fast enough!

Are you looking for another writer who can fill your craving for adventure, wilderness, wildlife, and strong characters? Add Pamela Beason to your list. The second book in this series, Bear Bait, is already in my sights.