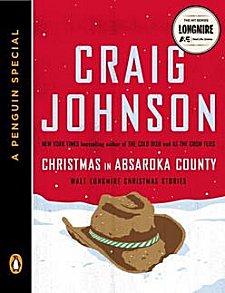 Any time I hear of the availability of new Craig Johnson books or stories, I drop what I'm doing and head on over to get my copies because I know good, enjoyable reading awaits.

"Ministerial Aid" shows Walt in a beat-up bathrobe and nursing a mean hangover while dealing with a delusional elderly victim of domestic abuse.

"Slick-Tongued Devil" shows Walt blindsided by grief when his wife's obituary reappears in the newspaper and a stranger knocks on his door two days before Christmas.

"Toys for Tots" sends Walt out Christmas shopping with his daughter Cady, and while Cady is inside the mall, Walt just may be able to grant the Christmas wish of a young Navy chaplain.

Last but not least, "Unbalanced" has Walt picking up a young female hitchhiker and trying to help her whether she wants it or not.

All four stories show that-- even when Walt's at his worst-- he's still miles better than most of us on our best days. That's because he genuinely cares about people, no matter if he's hung over or grumbling about human stupidity, and he's willing to go that extra two miles. Like Michael Connelly's Harry Bosch, Sheriff Walt Longmire believes that "everyone counts, or nobody counts." We all know we should be like those two men and live that belief, too-- but they're much better in their follow-through.

If you've watched A&E's Longmire series based on Craig Johnson's books and you've wanted to see what his writing is like, or if you've just heard someone raving about how good this author is, these four short stories will be perfect introductions to his main character without committing yourself to a full-length book. Trust me-- once you've read them, keep on reading because chapter one of the first Walt Longmire book, The Cold Dish, is included. Once you've read that, you're going to be a goner... and a happy one at that.

For those of us who are long-time Craig Johnson fans, three of these short stories will be familiar, but we won't care. We'll re-read short stories, we'll watch a TV series, we'll do practically anything to get a Walt Longmire fix until that next book comes out!

Christmas-themed short stories showcasing the character of Sheriff Walt Longmire
Rating: B
Source: Purchased from Amazon and downloaded to my Kindle.
by Cathy at Thursday, December 20, 2012