Children of the Street by Kwei Quartey 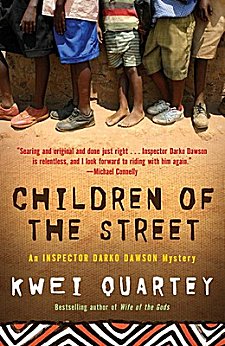 First Line: A day shy of his seventeenth birthday, Musa was a boy with the survival instincts of a grown man.

If you're a child living on the streets of Accra in Ghana on the west coast of Africa, you have to develop these survival instincts or you will die. There are sixty thousand other homeless street children in Accra. Musa is merely one of many.

When Detective Inspector Darko Dawson is called out to investigate the murder of one such street child in the slum of Agbogbloshie, little does he know how much he's going to learn about what it's like to grow up on the streets.

Dawson is an admirable but flawed character. His one vice has been smoking marijuana, and although he's been weed-free for several months now, he knows that particular illegal vice could come back to bite him at any time. He has a wife he loves deeply and a small son who was born with a heart defect. Darko and his wife are desperately trying to save money for their son's needed surgery, but the boy is running out of time.

Perhaps it's because Dawson is so worried for his son that this case of a serial killer targeting street children becomes all-consuming for him. As he follows leads through organizations that try to help these children, Dawson gets to know a few of the youngsters better-- and he becomes determined to do something for them.

Quartey has created a thrilling police procedural that's also strong social commentary. Moreover, it's not soapbox social commentary; through all of Dawson's relationships with family members, friends, and co-workers, through his investigation into suspects from all walks of life, the reader gets to see the real Ghana. It's a country which has had a lot of help in creating its current problems, and it's clear that all those responsible should have a part in solving them.

Writing a book that's part mystery part social indictment is a delicate task. Quartey has managed to do this very well. He's created a compelling story with memorable characters that's made even stronger by his portrait of the country in which his story is set.