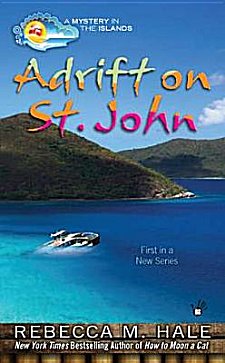 First Line: Deep within the murky, unlit darkness of the Caribbean waters skirting the northern tip of the Lesser Antilles, the stocky shadow of a catamaran powerboat rocked against a wooden pier off the tiny island of St. John.

For the past four years Penelope Hoffstra has been a resort manager on the island of St. John in the U.S. Virgin Islands. Penelope knows firsthand that there's no such thing as a tropical paradise, so when one of the resort's employees is reported to be killed when a water taxi sinks off the coast, she's not surprised that all is not what it appears to be.

If you begin reading this book expecting it to be a run-of-the-mill cozy mystery, you're going to become confused rather quickly. Rebecca M. Hale has written something different, and if you're willing to go with the flow, chances are you're going to appreciate it just as much as I did.

The main character is one Penelope "Pen" Hoffstra, resident manager of a resort on St. John. From almost the very beginning, we learn that she's not what she appears to be. She leaves most of the work to her assistant Vivian to take care of while Pen drinks more than she should and spends her days either hanging out at the table back by the dumpster outside the Crunchy Carrot where Richard the rooster forages for French fries, or sitting on her balcony chatting with Fred the iguana. Actually Richard and Fred were two of my favorite characters in the book. For one thing neither of them pretended to be something they weren't.

Yes, there are plenty of people pretending to be someone else, and we hear from several of them because Pen isn't the only narrator in the book. Hale also includes bits of the history of the island throughout the book, including information about eighteenth-century slave rebellion, which is woven into the plot.

None of the characters are particularly likable in this book, but that didn't bother me much. Why? Because Hale had me wondering what in the world they were all up to, and I had to keep reading to find out the answers to all my questions. The only thing that did bother me a bit was that, in the second half of the book, the narrator changed back and forth so quickly that it sometimes took me a paragraph or two to get my bearings once more.

Off balance or not, I really enjoyed this foray into the unexpected, and I look forward to reading the next book in this series.