A Flaw in the Blood by Stephanie Barron 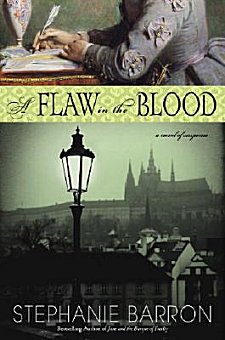 First Line: When the agony of the state dinner was over and his wife was preoccupied with the other women, he ceased to talk quite so feverishly before the crowd of people who'd come to the Rosenau to see them.

As Prince Albert lies dying in Windsor Castle, his wife, Queen Victoria, summons barrister Patrick Fitzgerald, who helped defend the Queen against an assassination attempt twenty years before. Victoria makes no effort to hide her contempt for the Irishman, especially when he refuses her demand. Within hours he and his ward are almost killed in a carriage accident, his chambers at the Inns of Court are ransacked, and a girl is dead. It takes no great stretch of Fitzgerald's imagination to think that all this is somehow connected to his command appearance at Windsor Castle. What will strain his credulity is why it's all connected.

I had the pleasure of meeting Stephanie Barron earlier this year, and she mentioned this book. She loves to find small historical nuggets of information that just don't add up and then create a story that incorporates them. That's what she's done-- very elegantly-- in A Flaw in the Blood.

What little historical nuggets did she come across? It is widely believed that Prince Albert died of typhoid due to the bad drains at Windsor Castle. The truth is that he did not. So... what killed him? It's also well known that Victoria passed hemophilia along to her children-- but what geneticists and genealogists want to know is how did she come to be a carrier of the disease in the first place? These are the historical facts upon which Barron based her novel.

Barron's story paints quite a different portrait of Victoria than the one we're used to, and it's a delicious portrait indeed. Here is a woman of passions and appetites, a woman who thinks nothing of showing contempt for her own children, a woman who will stop at nothing to keep her secrets, a woman who is more like her hated mother than she'd ever admit. Part of the novel is told by Victoria through entries in her secret diary. Much of what she tells of herself fits historical record very closely, but Barron has added that delicious twist of evil that made me smile. (Although I doubt that Victoria herself would be amused.)

Patrick Fitzgerald and his ward, Dr. Georgiana Armistead, tell their part of the story as does Count Wolfgang von Stülen, a ruthless German who's chasing the pair. These multiple viewpoints mean that the action hops around from place to place, and although I didn't find it confusing, I did find that those three characters weren't as finely drawn as Victoria.

There were a couple of other points that didn't sit well with  me: Prince Albert consulting Armistead (a woman!) about disease and sewage, and a crucial character in the plot being both a hemophiliac and a military officer, but on the whole, I loved the fiction that Barron wove around the facts. If you don't like fact and fiction blended in this manner, and if you don't like seeing royalty portrayed in a less than flattering light, I would suggest that you stay miles away from this book. However, if you do like the occasional well written and imagined blend of fact and fantasy, by all means get a copy of A Flaw in the Blood and read it. If, like me, you want to know more after you turn the last page, Barron has supplied the titles of several non-fiction books to read.