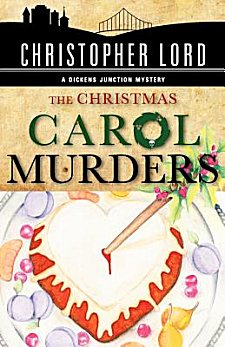 First Line: No one was dead: to begin with.

Like everywhere else in the country Dickens Junction, Oregon, was hit hard by the economic crisis. Everyone is hoping that there will be lots of shoppers spending lots of money this Christmas season. Some business owners have already given up and left; others are hanging on by a thread.

The only exception to the rule is Simon Alastair, owner of the bookstore Pip's Pages. His great-grandfather and grandfather were timber barons and built the small town of Dickens Junction, basing it on many of the principles found in the writings of Charles Dickens. Although far from being a millionaire, Simon is comfortably well off and able to afford to stock his bookstore with only the titles of books he's read. (He admits that he doesn't much care for contemporary fiction, so don't beat a path to the door of Pip's Pages expecting to find a signed copy of Fifty Shades of Grey.)

The holiday season is a special time of year in Dickens Junction, and Simon ponders three things as he walks over to take part in the annual Christmas tableaux: (1) the stranger who's been visiting all the businesses on the square, (2) the sudden run on Ayn Rand titles in his shop, and (3) Zach, a handsome magazine reporter who's just come to town. The tableaux come to a screeching halt when the stranger is found dead-- hidden underneath a costume right in front of Simon.

Since the killer almost has to be one of Simon's friends and acquaintances, Zach decides to stay and persuades Simon to go around interviewing everyone to see who has an alibi and who doesn't. Simon doesn't need much encouragement: he cares deeply for the town and the people who live there, and he doesn't want harm to come to either. When a second murder occurs, it becomes even more important to find the killer before anyone else dies.

The Christmas Carol Murders is a good, solid beginning to the Dickens Junction mystery series. Simon is an interesting character who seems content to stay in his beloved small town rather than move out to create a life for himself in a city. This behavior has already cost him two long-term relationships, and it's also made him extremely leery of beginning anything with Zach. Simon often trades literary quips with his friend, George, and it's one of the highlights of the book--as are Simon's eccentric methods of running a bookstore.

The rest of Simon's friends and fellow business owners are a fine cast to draw from in future books, but I did find two or three things that blunted my enjoyment of the story. This, for all intents and purposes, is a cozy mystery, but the second murder is so gruesome that I became a bit queasy as I read the scene. (And I do have a strong stomach.) This is so unusual in a genre known for its offstage violence and lack of graphic depictions of blood and gore that it startled me.

The other two things that proved distracting for me both concerned the author's wealth of description. For the first quarter of the book almost every male character has his teeth described in some fashion. (Yes, I kept track.) It made me wonder if there were dentists in the author's family tree. Fortunately the toothsome portraits didn't continue throughout the book.

The other thing that proved distracting for me (and it may very well be a personal quirk of mine) concerned how each character was described when he or she made an appearance: age, build, coloring, detailed clothing inventory, type of makeup, how it was applied (or lack thereof)... it was just too much. Had the BBC's What Not to Wear come to Oregon's version of Cabot Cove?  All this did was pull me away from a very good mystery.

Yes indeed, the mystery is a very good one with a surprising reveal at the end, and despite being distracted several times in this first book, I look forward to seeing what happens next in Dickens Junction-- and what happens to the characters living there.