Death of a Schoolgirl by Joanna Campbell Slan 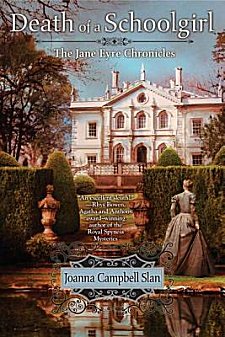 First Line: Reader, I am delivered of a son.

That first line will make any lover of Charlotte Brontë's Jane Eyre smile. The Rochesters live in Ferndean with their six-month-old son Ned, and their servants. It's been a life of seclusion, and Rochester is still recuperating from the injuries he sustained when Thornfield burned to the ground.

Rochester's ward, Adèle Varens is ten years old and in a boarding school in London. Jane is worried about her because what few letters they've received from the girl have sounded strange and have imparted very  little information-- a decided change from Adèle's normal behavior.

On the day when Rochester's doctor comes for a visit, they receive a letter from Adèle. It's another short, bland missive, but in a faint scribble on the page, Jane sees the words Au secours! (help) repeated three times. At first the Rochesters believe that the overly dramatic little girl is merely making a bid for attention, but when Jane finds a small note that looks very much like a threat included with the letter, the decision is made that Jane will go to London to make sure that everything is all right. Rochester is under doctor's orders to remain at home and will follow her in a few days.

The journey to London is a nightmare made even worse when Jane is beaten and robbed at one of the stops. Barely pausing at the home of Rochester's friend (where she'll be staying), Jane rushes to the school in time to see a body being taken away in the pouring rain. One of the schoolgirls is dead. What is first believed to be death by natural causes soon turns into a murder investigation, and since Adèle was partnered with the dead girl and vocal about not liking her, the Bow Street Runners are very interested in speaking to her.

The school is one teacher short, and a plan is formulated to have Jane temporarily pose as a teacher to insure that not only Adèle but all the girls are safe while the search is on for the murderer. This decision will put Jane's life in danger as well.

When I first learned of this book, I thought about all the novels based on Jane Austen's characters and thought, "It's about time Jane Eyre got her turn!" I'm not one for re-reading books, but there's always an exception to any rule. Jane Eyre is my exception to the No Re-Reading Rule.

Joanna Campbell Slan writes in a style so very reminiscent of Brontë's classic, but never is she a slave to the original. The style of the writing pulled me in immediately, but the story itself is what made me devour the pages. I was so engrossed and reading so quickly that it's a miracle that my eyeballs didn't catch fire. Little brave, intelligent, observant Jane is a perfect sleuth, and with the dead girl being so universally disliked by everyone at the school, all the clues Jane gathers don't seem to shorten the list of suspects.

The author introduces several new characters that add a great deal to the book, and I was also happy to discover that the police officer in charge of the investigation wasn't a slow-witted, belligerent oaf. A secondary plot line involving Jane's mugging kept me intrigued throughout; I almost couldn't keep myself from peeking ahead to see if I'd solved that particular mystery correctly.

Have you ever read a book in which you couldn't guess the identity of the killer, then when the person is revealed you want to slap yourself silly? That's me with Death of a Schoolgirl. I didn't know whodunit it until the most obvious clue of all was given... and then I realized that the author had placed clues throughout the book that I just hadn't seen. I love it when that happens!

If you're getting the impression that I loved this book, you are one hundred per cent correct. I only had one small item that momentarily threw me offstride (a question about the timeline and the potato famine in Ireland), but I shook that off immediately and kept on devouring the book. If you are a Jane Eyre lover, chances are excellent that you will love this book, too. (Get a copy now!) If you've never read the classic novel, I think that you will still enjoy this book as the marvelous historical mystery that it is.

I only have one question: When will I be able to get my hands on the next book in the Jane Eyre Chronicles???

Historical Mystery
Rating: A+
Source: Purchased at the Poisoned Pen
by Cathy at Thursday, November 08, 2012