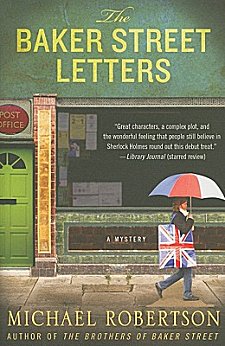 First Line: He only wanted just one cigarette.

Nigel Heath has never measured up to his older brother Reggie. Nigel can't quite seem to settle down to anything while Reggie has just moved his London law practice to larger digs at 221B Baker Street. The leasing arrangements were very agreeable, but there is a minor annoyance: people insist upon writing letters to Sherlock Holmes as if the fictional character were alive and could solve their problems, and part of the leasing agreement insists that these letters be answered. Since Nigel is awaiting a hearing to see if he can continue to practice law, Reggie sets him to work at the law firm answering the Holmes mail. It's very easy to do: just fill out one of the form letters for each one and put it in the post.

But Nigel can't fill out the form letters without reading what he's responding to, and one letter in particular catches his eye. The letter was written twenty years ago by a little girl in Los Angeles, California, needing help in finding her father who's disappeared under very mysterious circumstances. In no time at all, Reggie is following his younger brother to Los Angeles and attempting to solve a crime that would make the great Holmes himself salivate because-- you see-- Nigel Heath has managed to become a wanted man on two continents.

I often wonder what Sir Arthur Conan Doyle would think of his literary creation's unflagging popularity. Sherlock Holmes simply refuses to die. In fact, his health has never been better, what with television series, movies, and books being churned out with creative abandon. Author Michael Robertson has an imaginative premise, and it will be interesting to see how this series carries it out.

There's a touch of Laurel and Hardy about the Heath Brothers-- the hapless Nigel seemingly incapable of keeping himself out of any fine mess with older brother Reggie charging in to the rescue. The fact that both brothers have fallen in love with an intelligent and beautiful stage actress adds spice to these relationships.

The case, which involves a subway system being built in Los Angeles, is a puzzling one, and even though the why is revealed early, it's still difficult to arrive at the who. I enjoyed the author's dry wit throughout the book, but felt that both the wit and the characters' personalities could have been ratcheted up a notch or two. Robertson seemed oddly restrained, and this "holding back" made the book seem a bit lifeless at times when it truly could have sparkled.

That said, I did enjoy the book a great deal, and I love the premise. I'm already on the lookout for the second book in the series, The Brothers of Baker Street. I want to see what fine mess Nigel pulls Reggie into next!