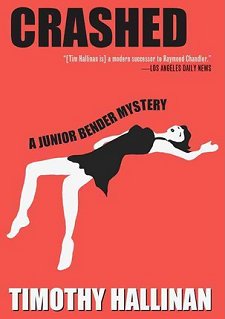 First Line: If I'd liked expressionism, I might have been okay.

If you're in the mood for a mystery that's just plain fun, this is the one for you. Junior Bender lives in a series of specially selected Los Angeles area motels. You see, when you're a burglar you don't always want everyone knowing where you live. Junior has a magic touch, too. He started breaking into houses when he was fourteen, and he has yet to be caught. He burgles a couple of places a month, his child support is paid, and he's good to go. He's a man of few needs is our Junior.

Someone keeps sabotaging the movie, and the boss wants Junior to get to the bottom of it. When Junior finds out the identity of the star, he's positive the former sweetheart of American sitcoms figures into the solution somehow. He also knows that he simply cannot let young Thistle Downing star in those films, no matter how far from grace she's fallen. Doing the right thing is going to put Junior on the wrong side of LA's scariest mob boss, so this is going to take some very careful planning. Is Junior going to be able to pull it off?

Timothy Hallinan knows how to write a smart aleck main character who has his own set of morals and a heart of gold. (In many ways Junior Bender reminds me of Hallinan's Poke Rafferty, although Poke doesn't have the necessary experience of having a career on the wrong side of the law.) Junior is more moral than most people one meets in Los Angeles, and almost everything he does is done with the thought of "What will my teenage daughter think of what I'm doing?" in his mind. As a father, he cannot in all good conscience let the young woman, Thistle Downing, act in a porno movie-- and as a man he can't let it happen either. If you've got your nose stuck in the air because Junior earns his living as a thief, you need to bring it back down again because this man does more good than most of us-- and he can do it in such a way that makes us laugh or at least smile.

We get to know Junior by bits and pieces as the story progresses, and both character and plot are fascinating. The rest of the cast-- including an ex-getaway driver and two little girls who know how to lose a tail-- is stellar, and don't be surprised if you find yourself exclaiming, flinching, or otherwise making noticeable reactions to Hallinan's story as it races along.

Yes, sometimes I'm in the mood for a book that's just plain fun. In the instance of Crashed, I was very fortunate indeed. Not only is this book fun, it's extremely well-crafted and insightful. Next up in the Junior Bender series is Little Elvises, and I've managed to snag a copy. Lucky, lucky me!