Talking to the Dead by Harry Bingham 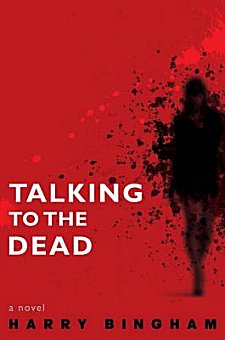 First Line: Beyond the window, I can see three kites hanging in the air over Bute Park.

The crime scene is a sad one: a woman killed after a short life ruined by drugs and prostitution... and her small six-year-old daughter lying dead beside her. The only thing that marks this crime scene as unusual is one small piece of evidence. Why would a drug addicted prostitute have the debit card of a very wealthy man who's been dead for months?

Police headquarters in Cardiff, Wales, has more important cases to focus on, but there's one person who can't let this one go: young Detective Constable Fiona Griffiths, who's got a reputation for being odd. She can become intensely focused on certain aspects of an investigation, and she doesn't always pick up on social cues. And everyone has heard about that two-year gap in her past.... (Psst! She had a breakdown. Mind-- you never heard it from me!)

Even though she has to get called on the carpet by her superior officer and told that she must do as she's told (no ignoring bits of the investigation that bore her, no haring off on some wild idea that she's gotten), Fi Griffiths has all the hallmarks of a brilliant, intuitive investigator. Told to check out the dead man's credit card and nothing more, Fi rapidly heads off on her own investigation because she's positive that dead little six-year-old has something important to tell her.

From the very beginning, Fiona Griffiths grabbed my attention and my sympathy. Throughout most of the book, her mental state is dealt with mostly by hints and innuendo, but the deeper she dives into this investigation, the more obvious it is that something is very wrong with her. From her flashes of insight and her way of putting clues together, to the way she counts the backwards and forwards "if's" in her name, to the way she tries to begin a relationship with a fellow officer, Fiona is an endearing-- and sometimes maddening-- creature.

She tries so hard to come down to Planet Normal-- to know when to laugh and how to smile at the right times-- that I couldn't help but want to get to know her and help her. So many times throughout the book, Fiona's thoughts would sing across the page and make me smile in recognition... or make my heart break. This is one incredibly memorable character, and I have to know more about her.

The fact that she's involved in a complex and dangerous investigation doesn't hurt one bit either. I couldn't put the pieces of it together and had to rely on Fiona's intuition to get us through. On his website the author states that he's working on more books in the series, and that is very welcome news. One thing that I would hope for in the future is that Fiona learns a bit of caution. The way she plows ahead into danger without waiting for backup-- although it fit the situation-- would mean that she would have a short life expectancy in the real world. Since she's a compelling character who's grabbed my interest in both hands, I want her to live for a good, long time.

Police Procedural, #1 in the Fiona Griffiths series
Rating: A+
Source: NetGalley
by Cathy at Friday, October 05, 2012