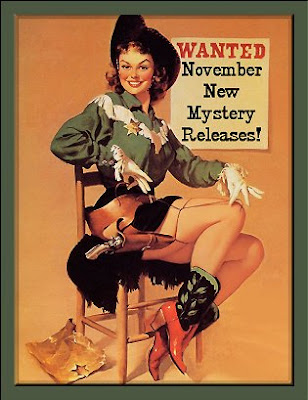 I don't know about you, but I've had some phenomenal luck lately with my reading-- lots of "A" list books! I'm hoping the trend continues in November because I've managed to get my hands on some advance reading copies of a few of the books that are going to be released.

Denis is working a new shift at the airport which gives him three days off (hallelujah!), and it gives me four days to spend part of each afternoon reading in my comfy white wicker chair in the back garden. Of course I also spend part of that time watching the wildlife wander in and out-- mostly pairs of brilliant butterflies, the occasional jewel-like flash of dragonflies, and plenty of birds-- but they're all used to me sitting there with my nose in a book and think nothing of coming within two or three feet of my little outdoor haven.

As usual, I've grouped these new releases by their release dates, and I've given you all the information you'll need to find them at your favorite book spots. (Synopses courtesy of Amazon.) Since it's November, who knows? Perhaps you'll give some of them as gifts... or suggest a title or two as gifts that you'd love to receive! 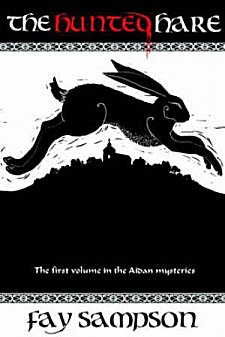 Synopsis: "Aidan and Jenny, with their daughter Melangell, have come the remote pilgrimage shrine of Pennant Melangell in the Welsh mountains. Jenny is dying of cancer. But the peace and spiritual healing they seek is shattered by a murder. Tensions flare among the small community at the House of the Hare and the residents of this hitherto peaceful valley. Even Jenny is not above suspicion. But soon it seems that she herself may be in danger. Aidan desperately tries to save his family." 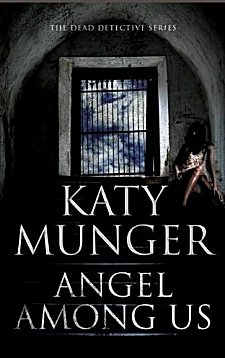 Synopsis: "In the fourth compelling ‘Dead Detective’ mystery, Kevin Fahey uncovers disturbing secrets when a schoolteacher disappears. Following his untimely death, former cop Kevin Fahey roams the streets of his small Delaware town seeking redemption in other people’s lives. He knows secrets the living do not know. When beautiful, pregnant pre-school teacher Arcelia Gallagher disappears, Fahey knows that she is hiding a violent past, and when the police investigation leads to Delmonte House, Fahey realizes that evil and fear have stalked the house before. Someone is lurking within its halls, their motives are unknown. Can Arcelia be found in time?" 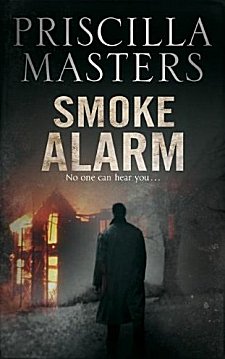 Synopsis: "A deadly fire reunites coroner Martha Gunn with Detective Inspector Alex Randall in the fourth book in this successful series. When firemen are called to an intense blaze at the Grange in Melverley, they find the bodies of Christie Barton, her daughter, Adelaide, and father-in-law, William, along with evidence that suggests the fire was started deliberately. Detective Inspector Alex Randall enlists the help of coroner Martha Gunn, but the puzzle deepens with a second house fire – the occupant, retired nurse Monica Deverill, is missing. Where is she, and what links the two fires? The answers lie in a secret buried in the past . . ." 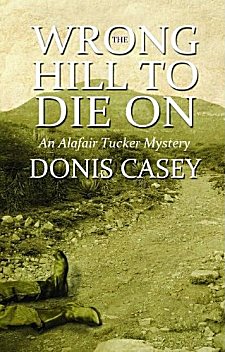 Synopsis: "Nineteen-sixteen was not shaping up to be a good year for Alafair Tucker, and finding Bernie Arruda dead in a ditch wasn't going to help matters. She had not wanted to come to Arizona in the first place. But her daughter Blanche was suffering from a stubborn ailment of the lungs, and her best chance for a cure was dry desert air. So Alafair and her husband Shaw had bundled their sick child onto the train and made the nightmare trip from Oklahoma to Alafair's sister in Tempe, Arizona. Yet as soon as they arrived on that bright March day, Blanche began to improve. But Alafair and Shaw soon discover that all is not well in sunny Arizona. Elizabeth's marriage is in tatters, tensions are high between the Anglo and Latino communities following Pancho Villa's murderous raid on Columbus, New Mexico, and Alafair suspects her sister is involved in an illegal operation to smuggle war refugees out of Mexico and into the U.S. And now here lies Bernie Arruda on his back in a ditch, staring into eternity." 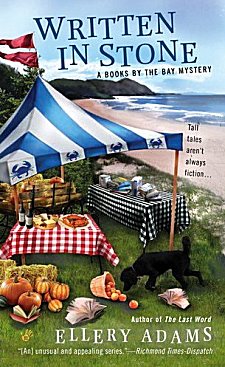 Synopsis: "When Munin Cooper, known as the Witch of Oyster Bay, warns Olivia Limoges that death is coming, neither of them realize that it is the older woman herself who will soon be found dead. And Olivia’s instincts tell her that something—or someone—more sinister than a mystical force is at play…

Olivia has a lot on her plate preparing for the Coastal Carolina Food Festival. When she hears the news of Munin’s untimely death, however, finding the murderer takes priority. The witch left behind a memory jug full of keepsakes that Olivia knows must point to the killer—but she’s got to figure out what they mean.

With handsome Police Chief Rawlings by her side, Olivia starts to identify some of the jug’s mysterious contents—and finds its secrets are much darker than she suspected. Now Olivia must enlist the help of the Bayside Book Writers to solve the puzzle behind the piece of pottery and put an end to a vengeful killer before any more damage can be done…" 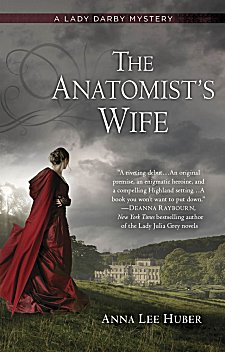 Synopsis: "Scotland, 1830. Following the death of her husband, Lady Darby has taken refuge at her sister's estate, finding solace in her passion for painting. But when her hosts throw a house party for the cream of London society, Kiera is unable to hide from the ire of those who believe her to be as unnatural as her husband, an anatomist who used her artistic talents to suit his own macabre purposes.

Kiera wants to put her past aside, but when one of the house guests is murdered, her brother-in-law asks her to utilize her knowledge of human anatomy to aid the insufferable Sebastian Gage--a fellow guest with some experience as an inquiry agent. While Gage is clearly more competent than she first assumed, Kiera isn't about to let her guard down as accusations and rumors swirl.

When Kiera and Gage's search leads them to even more gruesome discoveries, a series of disturbing notes urges Lady Darby to give up the inquiry. But Kiera is determined to both protect her family and prove her innocence, even as she risks becoming the next victim..." 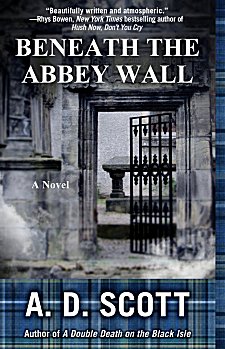 Synopsis: "On a dark, damp Sunday evening, a man taking a shortcut home sees a hand reaching out in supplication from a bundle of sacks. In an instant he knows something terrifying has happened.

In the Highlands in the late 1950s, much of the local newspaper’s success was due to Mrs. Smart, the no-nonsense office manager who kept everything and everyone in line. Her murder leaves her colleagues in shock and the Highland Gazette office in chaos. Joanne Ross, a budding reporter and shamefully separated mother, assumes Mrs. Smart’s duties, but an intriguing stranger provides a distraction not only from the job and the investigation but from everything Joanne believes in.

Beneath the Abbey Wall brilliantly evokes a place still torn between the safety of the past and the uncertainty of the future, when rock ’n’ roll and television invaded homes, and a change in attitudes still came slowly for many. As the staff of the Highland Gazette probes the crime, they uncover secrets deeply rooted in the past, and their friend’s murder becomes the perfect fodder for strife and division in the town and between her colleagues." 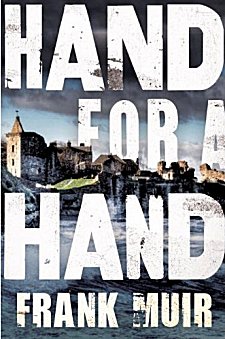 Synopsis: "Murder. It's the only word in a note clutched by the dismembered hand found on the lush green of a golf course in St. Andrews, Scotland. When DCI Andy Gilchrist learns the note is addressed to him, he realizes the thing he feared most has come to pass: a killer is deliberately targeting him. Though Gilchrist is no new hand at solving murders, this time he is overwhelmed by the flood of seemingly unconnected crises-- the note clutched in the hand, his son's missing girlfriend, his ex-wife's failing health, and his boss's decision to pair Gilchrist up with a scumbag detective from his past, who in turn is hiding evidence. Worse, the hand turns out to be just the beginning, and soon he's faced with a relentless parade of body parts." 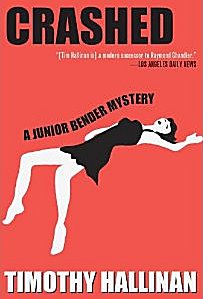 Synopsis: "Junior Bender is a Los Angeles burglar with a magic touch. Since he first started breaking into houses when he was fourteen years old, he’s never once been caught. But now, after twenty-two years of an exemplary career, Junior has been blackmailed by Trey Annunziato, one of the most powerful crime bosses in LA, into acting as a private investigator on the set of Trey’s porn movie venture, which someone keeps sabotaging. The star Trey has lined up to do all that’s unwholesome on camera is Thistle Downing, America’s beloved child star, who now lives alone in a drug-induced stupor, destitute and uninsurable. Her starring role will be the scandalous fall-from-grace gossip of rubber-neckers across the country. No wonder Trey needs help keeping the production on track.

Junior knows what that he should do—get Thistle out and find her help—but doing the right thing will land him on the wrong side of LA’s scariest mob boss. With the help of his precocious twelve-year-old daughter, Rina, and his criminal sidekick, Louie the Lost (an ex-getaway driver), Junior has to figure out a miracle solution." 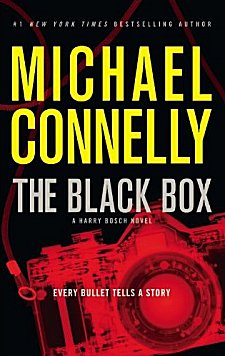 Synopsis: "In a case that spans 20 years, Harry Bosch links the bullet from a recent crime to a file from 1992, the killing of a young female photographer during the L.A. riots. Harry originally investigated the murder, but it was then handed off to the Riot Crimes Task Force and never solved.

Now Bosch's ballistics match indicates that her death was not random violence, but something more personal, and connected to a deeper intrigue. Like an investigator combing through the wreckage after a plane crash, Bosch searches for the 'black box,' the one piece of evidence that will pull the case together.

Riveting and relentlessly paced, The Black Box leads Harry Bosch, 'one of the greats of crime fiction' (New York Daily News), into one of his most fraught and perilous cases." 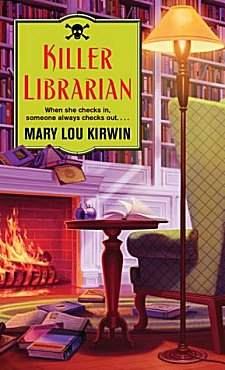 Synopsis: "Champion of the mystery section at a small-town Minnesota library, Karen Nash is about to embark on a dream trip to London—a literary tour inspired by every murderous intrigue, wily suspect, and ingenious crime found in the pages of the British mysteries that she devours. But she’s clueless why the love of her mid-life, Dave, would dump her hours before takeoff—until she spies him at the airport with a young honey on his arm! She decides the best revenge (for now) is to get on that plane anyway . . . and entertain schemes for Dave’s untimely demise while crossing the pond.

After touching ground in the hallowed homeland of Christie, Sayers, and Peters, she checks into a cozy B & B run by charming bibliophile Caldwell Perkins. Soon she’s spilling tears in her pint at the corner pub, sharing her heartbreak saga with a stranger. That night, a B & B guest drops out of circulation—permanently. And when Dave and his cutie turn up in London, Karen realizes they are an assassin’s target. With the meticulous attention to detail that makes her a killer librarian, Karen sleuths her way through her own real-life mystery—in which library science meets the art of murder."


Some fabulous books coming out in November, eh?  Which titles tickle your fancy? Do tell!