@ The Poisoned Pen with Donis Casey and Vicki Delany

I'd known about Donis Casey and Vicki Delany coming to the Poisoned Pen for quite some time, and it was written prominently in my calendar so you know I was looking forward to this with a great deal of anticipation. The only downside to the whole thing was the fact that Denis had to work and couldn't come with me. Oh well, I got dolled up anyway, climbed up into the Jeep and headed to the Poisoned Pen in Scottsdale on a perfect October Saturday.

I chose my books rather quickly, and had a nice chat with Ariel as I paid for them-- mostly about plants that discourage feral cats from hanging around your property. My next-door neighbors left their cat behind when they moved, and the cat is working on her third litter of kittens since June... and she wasn't the only feral cat in the neighborhood to begin with. Since I have a pool, bird baths, and fountains, all the homeless felines think this property is the local McDonald's. Now armed with good intel from Ariel, I foresee a trip to a garden center in the near future. (You get more than books when you visit the Poisoned Pen!)

Have you ever wanted to watch an author browse for books? I have, and I got to do just that when Vicki Delany arrived early and spent some time wandering the shelves at my favorite bookstore.

It was  difficult for me not to ask the author of my favorite Constable Molly Smith series which two books she purchased in addition to her Poisoned Pen cap, but I did find out later that one of them was Robert Goddard's Blood Count.

Vicki is the first author I've seen who's gone around the store introducing herself to people. (I'll probably see this more often as I keep attending author signings.) When she approached me, I immediately put down the book I was reading.

"Hi, are you here for the book signing?"

Now-- I have to admit that I was stunned and more than a little pleased when Vicki paired my name with this blog. Come to find out, she'd read just that morning that I was going to be there. Wow....

Shortly afterwards, Donis Casey came in with her husband. I'd met and talked a minute or two with Donis at Jeffrey Siger's author signing in September, and I'd had a chance to introduce her to my husband. Can you imagine how tickled I was when she walked up, said hello, and then asked, "Where's Denis?" Both these ladies have excellent memories!

Vicki was the first to tell us a bit about her newest book, a standalone Gothic thriller More Than Sorrow. (My review posted yesterday if you haven't had a chance to see it.) It's the story of Hannah Manning, an internationally renowned journalist and war correspondent who suffered a Traumatic Brain Injury (TBI) in Afghanistan and is recuperating on her sister's farm in Prince Edward County, Ontario, Canada.

"I've always liked modern Gothics, so I decided to try my hand at writing one," Vicki told us. Gothic novels tend to be tied to a particular house or a place that has a secret from the past.

This is the first book Vicki's written that is set in the area in which she lives. In having her characters live in a farmhouse that dates back to the eighteenth century, she was able to use local history as part of the story. Prince Edward County was basically untouched wilderness when settlers began to arrive. Most of them were displaced Loyalists chased out of the United States during the Revolutionary War. Maggie Macgregor was one of the dispossessed. She lost her husband, her home, her family, and almost all her possessions due to the war, and found herself dependent upon others for her survival.

Hannah is facing much the same situation. Unable to work while her brain heals, this voracious reader should be able to devour dozens of books, but she can't. Those who suffer TBI cannot read the printed page. There's not much Hannah can do; she never knows when a horrendous headache will force her to bed, and she finds herself facing endless sleepless nights. Being dependent upon her sister (and her sister's unsympathetic husband) is beyond frustrating. It's not until her brother-in-law mentions that his family had originally built the house and that there are trunks filled with letters and other papers up in the attic that Hannah finds something to capture her attention. Although TBI sufferers cannot read the printed word, they can read handwriting, and Hannah dives into all those letters like they're a lifeline. Through them she begins learning of Maggie Macgregor's life.

It was fascinating to listen to Vicki speaking of the history woven into the book as well as the information about Traumatic Brain Injury. If I hadn't already read More Than Sorrow, I can guarantee that-- after listening to Vicki-- I would be now!

Donis Casey writes one of my favorite series, too-- the Alafair Tucker series. Alafair is an Oklahoma farm woman raising ten children in the 1910s. The latest book in the series, The Wrong Hill to Die On has just been released, and (I'm happy to say) it's next up on my reading list.

Donis told us that the way she usually arrives at the next story in Alafair's life is by asking the question "What effects Alafair in her daily life?" To find this out, the author reads a lot of newspapers from the era courtesy of the Muskogee County library system in Oklahoma.

In reading the area newspapers for 1916 (the year in which the book is set), Donis discovered that it was the rainiest winter ever in the West. Widespread flooding, roads washed out, trains running late if they could run at all. This gave Donis a starting place for her book.

In The Wrong Hill to Die On, all of Alafair's children are sick, and she's been run ragged nursing them all. Fortunately Alafair doesn't get sick herself, but if she did, she'd be just like Donis's mother and say, "I just don't have time," and get on with it. Everyone recuperates except for daughter Blanche. The doctor tells Alafair and her husband Shaw that the young girl's lungs need to dry out, and the decision is made for Alafair and Shaw to take Blanche to Alafair's sister who lives in Tempe, Arizona. 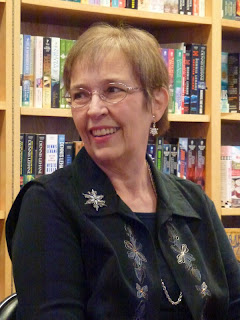 Due to all the rain and washouts, it takes the train ten days to take the Tuckers from Boynton, Oklahoma to Tempe, Arizona. When they arrive, they find Alafair's sister, Elizabeth, in rather unhappy circumstances but excited about a movie being filmed not far from their home. Elizabeth uses the Tuckers' arrival as an excuse to have an open house to which she invites many of the movie people. After the party, one of the members of the mariachi band that Elizabeth hired is found dead in an irrigation ditch.

In 1916, the Germans were intent on keeping Mexico riled up so the United States would stay out of World War I. This is also the time Pancho Villa was conducting his raids across the border into the US. This gave Donis the opportunity to show that the present day isn't the first time that Arizonans have been up in arms about illegal immigrants. I really appreciated all the author's insights into her research because it's an important part of what makes her series so real.

"Mixing up your reading is a good thing."

After both women finished talking about their latest books, host Barbara Peters led a discussion about standalone versus series books. Barbara likes standalones because they "have no safety net. Everyone can die. This makes reading standalones a much different experience than reading series books." In reading series books, all three women agreed that they didn't care for books in which the author goes back and changes a character's personality because they've written themselves into a corner. Doing that just doesn't work for any of them (or me) because one of the things about reading a series is that the reader likes having something-- like a main character's behavior-- that can be relied upon. We were all in agreement when Barbara said, "Mixing up your reading is a good thing."

This talk about standalone books led Vicki to tell us of an experience she had when at a book signing for her standalone Scare the Light Away in which a woman reads her mother's diaries. When she told one woman what the book was about, the woman shook her head, saying, "No. I don't think I'd like it. My husband died a year ago, and I read his diaries. I thought I knew him. But! I! Didn't!" The woman then began to cry.

On a much lighter note Vicki then told us about finding a trapdoor when ripping up old carpeting in her 1880s house. Something tells me Vicki and I share a love of old houses. I already know we share a love of Gothic mysteries!

The time flew by all too quickly. I had both my books signed by the authors and then I climbed back into the Jeep and headed for home. If you ever have a chance to meet either one of these talented women, please take it! If you can't, then please do the next best thing: read their books!
by Cathy at Wednesday, October 31, 2012