Make Memories... Don't Be One 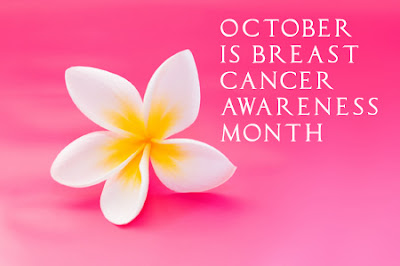 Have you had your annual mammogram yet? I hope so. One simple test can mean the difference between making memories... or being one. It's as simple as that.

How would I know? On the morning of October 30, 1993, my phone rang at 5 AM. It was my grandfather, in tears, telling me that my grandmother had died in his arms a short while before. Irene Brookshier had just lost her fight with breast cancer. My grandfather had just lost his partner of sixty years.

My mother was a librarian, and I grew up in the village library, but the roots of my love of reading lead straight back to Irene Brookshier, my maternal grandmother. She was a bright, intelligent young girl with blue black hair who, once she caught sight of my happy-go-lucky, handsome grandfather, fell in love and never looked back.

The Depression lingered on in our part of central Illinois. Times were tough when my mother was born in 1935, and she and my grandparents lived in a room in the old hotel on Main Street. During World War II, my grandmother worked in a factory in Decatur while my grandfather joined the Navy and fought in the South Pacific. She grew pale and quiet when letters from my grandfather didn't arrive, and she dealt with his horrendous nightmares when the war was over and he came home. In 1948, my grandfather was well on his way to becoming a master electrician, and they bought an old house in town.

I came on the scene as the only grandchild in 1955. As I went through old photos, I realized something. There are several of my grandmother and me when I was five-years-old or younger, but the more independent I became, the more I became Grampa's girl.

I worshiped my grandfather. I was a tomboy who preferred spending much of my free time outdoors with him instead of staying behind with my grandmother, whose weapon of choice was her sewing machine and her natural milieu her kitchen and flowerbeds. Homemaking was boring. I wanted to get out and explore. Sewing, weeding and cooking were not for me!

My mother and grandfather were outgoing, funny people, and I gravitated to them as naturally as breathing. My grandmother always seemed content to take a backseat to the three of us. Many people in town thought she was stuck up because she didn't socialize much outside the family. She just never seemed to have much to say to anyone she met on the street or in the store. It wasn't until I was eighteen and moving away to college that my grandmother and I ever really sat down and talked. That one short conversation was my first hint that my grandmother wasn't the person I'd grown up believing her to be.

The years passed. I moved to Arizona right after college graduation, and I kept in touch with my grandparents through letters and phone calls. But in 1991 it was as though a homing beacon had activated, and I found myself flying back to central Illinois to spend some time with my grandparents.

I drove them down to Lexington, Kentucky, and the three of us had a wonderful time exploring. As I watched my grandmother indulge in her favorite hobby of photography, I made a note to myself to buy a higher grade camera and start taking more photos. When we got back home to Moweaqua, my grandfather went to see how his garden outside of town had fared over the weekend, and my grandmother and I sat and talked. Really talked. It was the first sit-down conversation the two of us had ever had in which my grandmother treated me as an adult on equal terms. She told me family secrets that just aren't trusted to phone lines or paper, and my eyes were opened to things that had happened long before I was old enough to understand. I looked at my grandmother with new respect, as an adult, not as a grandmother. And I liked her.

In 1992 my mother drove back to Illinois, and after finishing up a training job for Target, I flew back. As usual my grandmother insisted on taking photos of us all. My mother was notorious for refusing to be in any photographs, but this time she demanded her share of time in front of the camera. My grandparents were shocked and thrilled. I looked at my mother and knew there was more to the story. There was.

Mom had had a premonition that this would be the last time the four of us would be together. She was right. Shortly afterwards my grandmother was diagnosed with breast cancer, and she had a radical mastectomy, followed by chemo and radiation. But they hadn't caught it in time, and at 5 AM on October 30, I got a phone call no one wants to receive.

My mother and I drove back to Illinois together. It was a cross country trip in miserably cold weather, and neither of us were in the mood to talk. The funeral service was surreal to me, and the weather was so bad that the few people who showed up didn't hang around long. After all, my grandmother had never had many friends, and it wasn't the sort of weather to be out in.

That evening my mother and grandfather ate quickly and went into the living room to watch television and grieve together. I was left at the kitchen table with my own thoughts and a mess to clean up. As I stood at the kitchen sink, my back aching because the counters were made for my five foot tall grandmother, not five foot ten me, I listened to the sad voices murmuring in the other room. And my mind began to wander.

It wandered down through all the years and all the meals when-- after the most cursory help-- my mother, grandfather and I would adjourn to the living room and leave my grandmother alone in the kitchen. My grandmother, who always seemed content to remain in the background. My grandmother who wasn't stuck up but shy. My grandmother who loved to read and was passionate about travel and genealogy and loved photography so much that she built her own dark room. All those years, all those meals, all those times we just left her there. Alone.

Did she ever feel like the hired help, as I did that night? Did she ever feel like taking out the trash and just walking down the alley, down the street... and never coming back? My mind flew through dozens of mental snapshots: we both loved books and flowers and birds and traveling just to see what was on the other side of the hill. We both started turning gray at a very young age. We both hated clutter and frilly clothes. Some people thought I was stuck up, and I wasn't... I was... shy.... Just. Like. My. Grandmother.

That's when it hit me. Although I'd tried, I could never be outgoing like my mother and grandfather. I often wondered why I didn't really fit in the family when all the time I did. I was just staring at the wrong two family members. I had my match right there all along.

I resemble my grandmother, intellectually and emotionally, more than I do anyone else in my family, and due to breast cancer and my own blindness, I was denied having a real relationship with her.

It's pointless to dwell on might-have-beens. Regrets are a waste of time. All I can do now is share this woman with all of you and urge everyone to do everything they can to be around for a good long time. Please... make memories, don't be one. 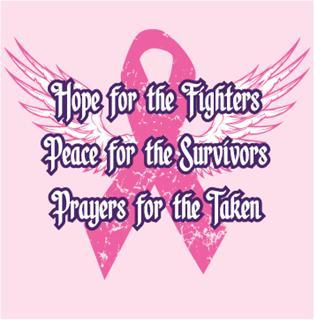 Email ThisBlogThis!Share to TwitterShare to FacebookShare to Pinterest
Labels: Breast Cancer Awareness, Family History, Get to Know the Blogger