If the staff at the Poisoned Pen learned anything last Friday night, it was not to trust the number of likes on their Facebook page.

Denis and I showed up early, as is our habit, and I overheard one staff member say to another that they were expecting 40 people because that's how many people had responded to the Facebook announcement. As I snatched up my copy of The Woman Who Died A Lot (Jasper Fforde's latest Thursday Next adventure) I thought that number was a bit low, especially since Denis and I were there and neither of us had clicked that infamous like. I was right. I bought my books (didn't think I'd walk out of my favorite bookstore with just one book did you?), took a seat in my favorite spot, and proceeded to read. I didn't get very far because my need to people watch overcame my need to read. 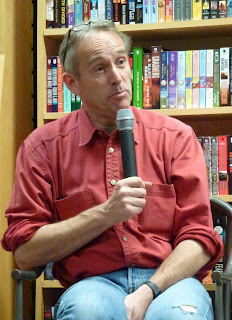 After twenty years in the film industry, Fforde decided to try his hand at writing. It took him twelve years and seven books to be published. "Try to imagine," Fforde told us, "writing 60-word pitches of my books to publishers!" Everyone in the building laughed because one of the very things we love about his books is the fact that you really can't explain them to someone who hasn't read them. (I know that whenever I've recommended his books to people who then ask me what they're about, I respond with "Don't ask, just read!")

Who Killed Humpty Dumpty was his first book, one that-- as he told us-- "I thought could sell by the title alone." Although this first book later became The Big Over Easy, Fforde finally reached a point where he didn't care anymore: "This is clearly going to be a hobby for the remainder of my days, so I'm going to write whatever I want!" Whatever he wanted turned out to be The Eyre Affair, the first Thursday Next book and a bit of a publishing phenomenon because not only was it well-received in the UK, it flew across the pond and became popular here in the United States.

[A short pause while I digress.... There are special books in every reader's life, and The Eyre Affair is one of mine. I can clearly picture myself browsing the staff recommendation table at the Barnes and Noble outside Metrocenter here in Phoenix. I spotted a book with Eyre in the title and wondered if it had anything to do with Jane Eyre. Something about the book spoke to me, and that's all it took for The Eyre Affair to enter my life and start me on a wild and wacky adventure courtesy of the mind of Jasper Fforde.]

"If I'd been sitting here staring at the ceiling..." 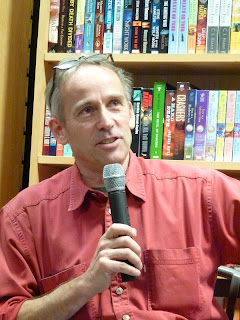 Fforde's publishers were over the moon about the reaction to (and the sales of) The Eyre Affair and kept asking Fforde "Don't you know how amazing this is?!?" to which he would reply, "Jolly good." He had no idea of how rare it was for a debut British author to be in the top ten on the New York Times bestseller list during the first week of publication.

Inevitably talk began of a sequel. At his first meeting with the people at Hodder, they asked him all sorts of questions that he'd just answer yes to. Are you going on tour? "Yes, love to!" Will there be a sequel? "Yes, of course!" What will the title be?  "Lost in a Good Book?" Fforde looked out at us and said, "If I'd been sitting here staring at the ceiling, I would've said Rotating Fan." 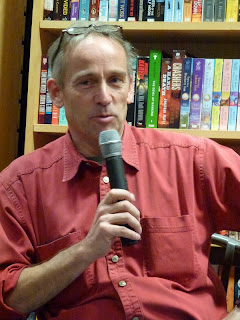 When asked about how he plots his novels, Fforde laughed and said, "No, it all just comes spewing out." Each book begins with a vague idea, but until he begins to write and let that idea evolve, he doesn't have any idea what the book is about or what's going to happen. This method wouldn't work for many writers, but it certainly does for Fforde.

He also leaves little on and off ramps in each book that he can pick up and use to create a new one. It was fascinating to hear how his mind works.

Naturally Fforde gets lots of mail. Some have pointed out the errors in physics present in his books, to which he replies (often sending along a Certificate of Pedantry) "Is that the only mangling of physics you found? Because if it is, you've missed an amazing amount."

The never-ending pursuit of a lame joke... 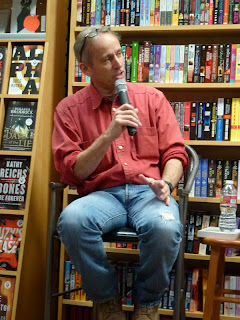 Anyone who's read a Jasper Fforde book knows that the man's mind is filled with puns, jokes, and other madness-- and he's not averse to having a little fun with other folks in the publishing industry.

Have you ever wondered about those characters with the unpronounceable names? Fforde introduced them especially to bedevil the readers in the audio book business. He's had people call him up and ask him how those names are really pronounced.

Fforde also talked a bit about his 1300-page website which he calls "after sales service." Back in 2001, Jasper and his wife taught themselves HTML. Everything on the Jasper Fforde website is done by them, and they never take anything down. Fforde kept mentioning how amateurish it looked, but I remember thinking that it had a charming "retro" look the first time I visited it!

During the Q&A portion of the evening, Fforde was asked about interest in his books by the film industry-- has there been any? "Yes and no," he replied. It's his belief that the best thing to do with the Thursday Next series is to turn each book into six one-hour programs for television, but that would be very expensive, and no one has expressed interest in filming the books that way. I believe that Fforde's books should stay in the realm of the imagination. There is no way any film company could begin to do justice to the readers' own flights of fancy. 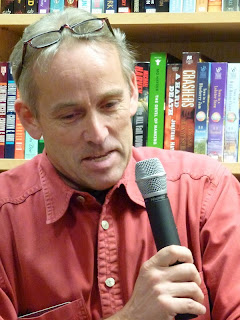 As Fforde talked about a few of his favorite characters, I found myself remembering a series of short stories that my own mother wrote many, many years ago. The main character was Lad, an Anaconda snake who wore a tasteful gold hoop in one ear... and was a hit snake for the Mob. Those stories were so much fun, and I began to picture my mother and Jasper Fforde sitting at the kitchen table, bouncing ideas off each other and coming up with one crazy character, one pun, one silly name right after the other.

That vision, and those memories of my mother, made me realize just how blessed we are that this author with his love of literature and the absurd has been able to sweep us off into worlds of imagination and laughter.

This was a very special evening, and I left a lot out in my recap because I think you should be able to see and hear it for yourself. Here is the entire event courtesy of the Poisoned Pen and Livestream. (Denis and I show up on this video more than once, but I'm not giving any hints!)  Enjoy!