An Unattended Death by Victoria Jenkins 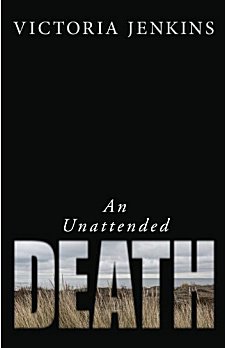 First Line: The body, face down and almost completely submerged in the tea-colored water of the slough, might easily have been mistaken for a driftwood log.

After four years with the LAPD, Irene Chavez has returned to her rural Washington state roots to raise her teenage son. Although there is no overt hostility towards her in the Mason County Sheriff's Department, Irene knows she changes the dynamic and makes several of the men uneasy. She can deal with it.

Especially in times like now, when there's an unattended death and everyone else is either on vacation or has full case loads. By default, Irene gets this death-- the probable boating accident/drowning of Anne Paris on her family's summer property on an island in Puget Sound.

As Irene makes her measured, careful way through the investigation and gets to know those closest to the deceased, she is convinced that the boom of a sailboat didn't kill the young psychiatrist, but someone close to her. All she has to do is prove it.

Irene Chavez is definitely a character that I want to see a lot more of. Her background, her self-reliance, her becoming a police officer then a young widow who decides to move her son from Los Angeles to rural Washington state... as Jenkins gradually unfolded Irene's history throughout the narrative, the more I liked her, and the more I wanted to read about her. The relationship between her and her son is a special one that adds so much to the story as does the appearance of a new county attorney who seems interested in her. Irene has closed off many rooms of her life, and as she investigates further into the case of the dead woman, the reader feels one or two of those doors beginning to open. The lure of what lies beyond is tantalizing.

Jenkins' descriptions of life in a remote area on Puget Sound are almost poetic in setting a scene and a mood, and although I knew the identity of the killer the very first time the person was described, it didn't matter. I thoroughly enjoyed the careful plotting, the strong sense of place, and the oh-so-rich character development. I am definitely going to keep both eyes open for another book featuring Detective Irene Chavez!