@ The Poisoned Pen with Louise Penny

I had September 3 marked on my calendar ever since I heard that Louise Penny, author of the wonderful Inspector Armand Gamache series was going to be in town. There was no way I was going to miss this!

I had the feeling that this Labor Day event was going to be packed, so I left extra early. When I walked in the door of my favorite bookstore, I saw that I wasn't the first on the scene: two ladies sitting at the back had already arrived from Tucson. Employees were worried that they were going to run out of copies of The Beautiful Mystery, so I made the decision not to buy one. I'd already read the book, and I thought it better that I let someone else have the one I would've snapped up. I bought two other books and found a corner in which to sit and wait until the chairs were put in place. I pulled my tablet out of my purse and started to read, but found myself making new friends and talking books instead, which is one of the best reasons to attend author signings in the first place.

When Poisoned Pen owner Barbara Peters walked in and discovered that they had sold out of Louise's book, she told her employees to call every bookstore in the Valley for all available copies. Every copy of The Beautiful Mystery in the entire Phoenix metropolitan area was sold out, and there was a waiting list containing many more names. It was standing room only at The Poisoned Pen, and before Louise ever made an appearance, we were hearing the inspiration for her latest book-- beautiful Gregorian chants.

"I think he downloaded The History of Concrete." 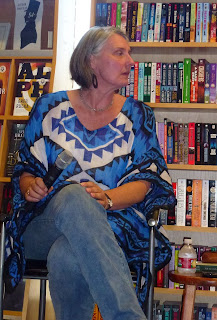 You never know what you're going to learn when you attend an author event. This one was no exception.

Louise told us that Canada is the only country in the world that charges duty on books being shipped into the country, which can make book buying a pricey endeavor. Why does Canada do this? Louise and Barbara weren't sure. It's possible the government believes this protects the book industry there.

Barbara then said that she'd had many people ask her how her bookstore was doing in these troubled financial times. Her response: "We stopped being a bookstore long ago. We're a media company." She's not being facetious. She and her husband also own Poisoned Pen Press, and most of their author events are streamed live around the world via Livestream. (You can sign up for a free account and follow the Poisoned Pen if you'd like to see any of the events for yourself.)

Their opening remarks rapidly turned to eReaders and eBooks. Barbara let us know that they are very close to being able to offer Kobo downloads at the Poisoned Pen, which is wonderful news for anyone with that particular eReader.

Louise said that she saw eReaders as tools, not as replacements for physical books. She does not have an eReader. She spends so many hours looking at a screen that that's the last thing she wants to do in the evening. She prefers to curl up with a real book and chocolate to relax.

On the other hand, her husband Michael purchased an eReader and was like "a kid in a candy store." He downloaded dozens of books to his eReader, and Louise swears that one of the titles he got his hands on was The History of Concrete. He's settled down a bit now, and can be found reading physical books along with Louise.

"We stayed in the Presidential Cell." 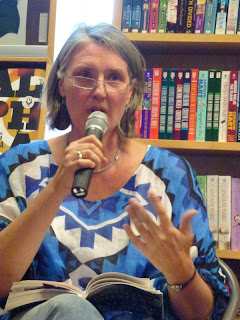 Although there is a monastery close to where Louise and Michael live, she'd never had much contact with the monks there other than to take friends over for 5 o'clock mass and to buy cheese. Once she'd decided to write a book that takes place in a monastery and has a great deal to do with Gregorian chants and the day-to-day religious life, she knew she had a lot of research to do.

She decided to write to a monastery, let them know what she wanted to do, and ask them if she could visit. Since these men have chosen to live a contemplative life and since their vows mean they are men of very few words, Louise fully expected to be turned down. Instead she received a letter from Brother Raymond which said, "Of course. Come on in!" Since the response was the exact opposite of what she'd expected, Louise was suspicious. "This is a trap. Where did my letter really go to?" But after confirming Brother Raymond's information, she and Michael found themselves staying at the monastery overnight... in what was called the Presidential Cell. Louise was absolutely flabbergasted that she and Michael were allowed to spend the night together in the same room.

She was in the monastery for eight services. The first three times, Louise had much the same reaction as Jean-Guy Beauvoir in The Beautiful Mystery: eye rolling and boredom. However, by the fourth service, it became very transformative for her. "I've never before experienced such a sense of deep, deep peace," she said. Being there was a great aid in helping her describe the music, the surroundings, and the routine.

"Each book has a different soundtrack." 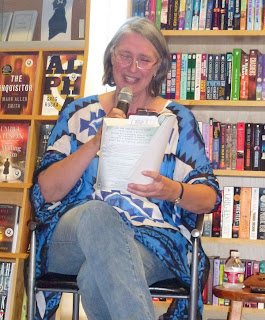 After reading from the prologue of her book, Louise told us that music can have a very powerful effect on her. She listens to music as she writes, and each book has a different soundtrack.

For The Beautiful Mystery, Louise chose to use a society of monks that did not survive the Inquisition. That way she would be offending no one, and that way she could also build the monastery in which they would live.

She created a world of beauty and peace that is also filled with conflict and duality. These men have taken vows of silence, yet they sing like angels. They don't converse with words, but the lifting of an eyebrow or the movement of a hand can have the same effect as a gunshot. When Gamache enters into this world, he must decode all the ways these men have of communicating. It is not easy.

"Were you always this mean and you just hid it well?" 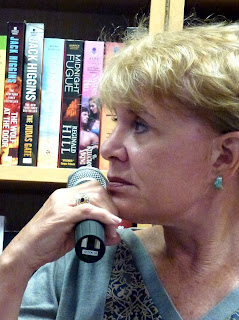 Barbara Peters pointed out the fact that Louise's last two books have shown a much darker streak. "Were you always this mean and you just hid it well?" she asked.

Louise replied that this darker streak had its roots all the way back in the very first book, Still Life. This has all been very purposely done.

When Barbara mentioned that The Beautiful Mystery is the first book in the series which has no characters from Three Pines making an appearance, Louise said, "I don't want to fall into a formula. I'm so lucky with my readers. You allow me the leeway to develop my stories and my characters. You trust my judgment." Now every second book in the series will be set outside Three Pines. I found myself nodding enthusiastically. When someone writes as beautifully as Louise Penny, how could we not trust her judgment?

"Would you mind if we shot this in Calgary?" 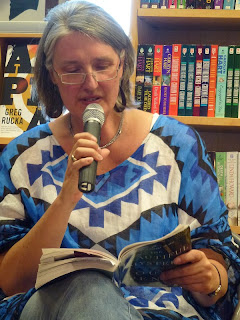 In October, Canadian television will begin filming a two-hour television movie based on Louise Penny's first book, Still Life. Louise had said no many times whenever she was asked about turning her books into films, but finally changed her mind when she was named as one of the executive producers so she could "protect her characters."

She's well aware of the fact that they only have one shot at getting this movie right, and it has to be from the very beginning. So when she's asked questions like "Would you mind if we shot this in Calgary?" her response is a decided, "Well--yes!"

Louise believes that Still Life doesn't translate well as a standalone film, so there are plans to make a two-hour film from each book in the series. (Hopefully these will all cross the border into the US soon after their release in Canada!)

Wonder of wonders, the Department of Tourism in Quebec has started a little Gamache Tour, and when we all wondered which village they would choose to portray Three Pines, Barbara Peters said, "Three Pines should magically appear every seven years like Brigadoon." I think we all agreed!

Peters also had another suggestion for Louise, telling her that she should make cameo appearances in all the Gamache films as Colin Dexter has done in all the Inspector Morse and Lewis films. Louise seemed to like the idea, so I'll be keeping my eyes peeled! 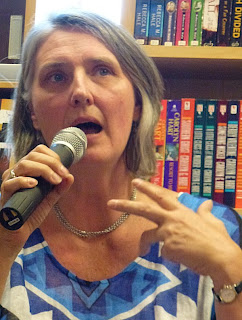 This gifted writer who has not a single non-Gamache idea in her mind, was asked about our favorite Three Pines character, Ruth, the irascible poet. (Before the event began, I overheard several women claiming that they were Ruth.) She told us that she herself is not the writer of Ruth's poetry-- that Margaret Atwood is the responsible talent.

Louise quoted Robert Frost's line "A poem begins as a lump in the throat," continuing "That's how each of my books begins."

In each book, Louise tries very hard to break the barrier between the reader as a voyeur and the reader as feeling a part of the book.

I can attest to the fact that Louise Penny has succeeded brilliantly in her task.