I fell in love with Jeffrey Siger's writing when I read his very first book, Murder on Mykonos. He was also one of the first authors to participate in my weekly Scene of the Crime series.

When I learned that he would be making a stop at the Poisoned Pen on Wednesday, September 19, Denis and I jumped in the Jeep and headed for Scottsdale.

We arrived in plenty of time for me to look for some books to buy, and in no time Denis and I were reading our books, waiting for the show to get on the road. One of my favorite book bloggers, Lesa Holstine, was early, too, so I put my book back in my purse and we settled in for a good book chat.

As time neared for the event, the chairs were rearranged in a circle. Since I'm one of those people who always like to lurk in the back row, I was a bit out of my comfort zone, but I wasn't about to let that slow me down. At least no one would be sticking flyaway hair in front of my camera lens!

"Other larger publishing houses may want to hire you away from us...."


Bookstore owner Barbara Peters started things off by telling us a story. "Jeffrey and I are both lawyers, and we work well together. After he wrote his second book, I told him 'Other larger publishing houses may want to hire you away from us, and I just want to tell you now that I will hunt you down and kill you if you sign a Random House contract.' Without missing a beat, Jeffrey looked at me and said, 'What would I do with all that money-- retire from my law practice in New York and move to Mykonos?' I had no answer for that!"

Now... if this post is Jeffrey Siger 101 for any of you, that's exactly what Jeffrey's done: he's retired from his law firm and lives half the year in the US and half the year on Mykonos in Greece.

From artist to doctor to diplomat to lawyer to author.... 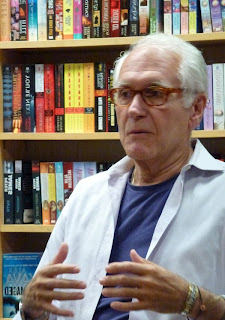 Due to his father's insistence that Jeffrey have a job that didn't have a 2 AM wake-up call and that would put food on his table, the young boy decided to be a doctor instead of a sculptor. Then he went to college and fell in love with politics, so he then wanted to be a diplomat or a professor. His father still wasn't convinced that his son had chosen the right career. Jeffrey wound up becoming a lawyer, and several years later, he called his father to let him know that it was 2 AM and his son was still at work. There's no two ways about it: Jeffrey much prefers the hours he keeps now.

When he decided to retire from law to move to Greece and give writing a try, many people asked him how on earth he would walk away from all that money. Jeffrey's reply? "It's better than being carried away from it." This man works to live; he most definitely does not live to work.

Siger first visited Mykonos thirty years ago, and from the moment he stepped foot on the island, he felt as though he had come home. As an expat American writer, he's very unusual because the largest part of his fan base consists of local Greeks. This tells you how true to the life and the culture of Greece his books are.

"I learned how to write as a lawyer." 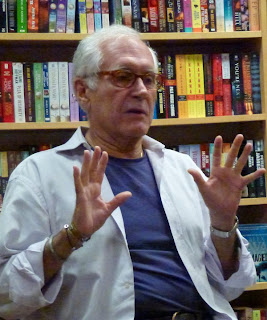 Siger has two rules as he writes: (1) Tell the story as it must be told, and (2) Don't take cheap shots. The first rule is such a plus for the intelligent reader because it means his books aren't filled with gratuitous sex or violence. "I don't have to tell you how people die; I don't have to tell you how people make love. What I write must further the story." Siger much prefers that the reader's own mind fills in those types of detail because imagination is such a powerful tool in increasing suspense and tension.

Siger's novels deal with present-day happenings in Greece, to the point where the Greek press has called him prophetic. There is a problem when an author writes on the edge of current events because it means that he's always in danger of being overrun by those events. Siger had this happen to him when he wrote a book about human trafficking and a particularly nasty bad guy. A short time before the book was due to be published, the events in the book actually happened in the real world. The book had to be scrubbed. The same thing may happen to Siger's next book, although if it does, the events won't be known outside Greece, so the book can still be published. 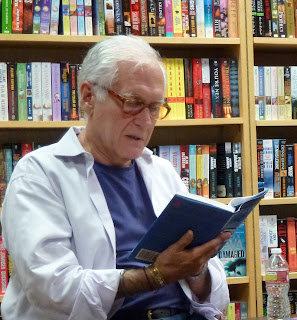 Jeffrey made us laugh when he told us of what Greek reviewers and journalists have said about his books: "There are eight million Greeks. Half of them think they're writers... so why did it take an outsider to write these books?"

Siger is convinced that one of the reasons why he gets along so well with Greeks is that he shares the same warped sense of humor.

He's been living on Mykonos for six years now, and was very happy when Barbara Peters told us that, now she knows Jeffrey's schedule of when he lives on Mykonos and when he lives in the US, she's going to coordinate his publishing schedule to coincide with it.

"Mykonos is blessed with three things...." 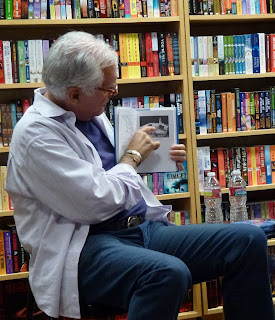 It's obvious that Siger loves Mykonos-- its people, its history, its scenery-- and he told us that the island is blessed with three things: ocean breezes, two dozen of the most beautiful beaches, and light from the birthplace of Apollo... the island of Delos.

It's important to him to show Greece and its people as they really are and to make them recognizable to Greeks and understandable to English-speaking people.

Jeffrey told us more about Greece, the financial crisis that has crippled the country, and his books. It was a wonderful talk given by an intelligent, generous, funny man, and I thought it ended all too soon. I definitely look forward to his next visit here.

If you'd like to read another, more detailed, recap of Jeffrey Siger's appearance at the Poisoned Pen, there is an excellent one at Lesa's Book Critiques. You can also learn more about Jeffrey Siger's books on his website. If you'd like to see the entire talk online-- visit Livestream... it's the next best thing to being there!

Once you've done all that, please read one of Jeffrey's books. I think you'll be hooked! With all my talk of the cutting edge of current events, I may have given you the idea that they're thrillers or political potboilers. They are not. They are perfect for all of us who love wonderful characters and strong stories.