Jane: The Woman Who Loved Tarzan by Robin Maxwell 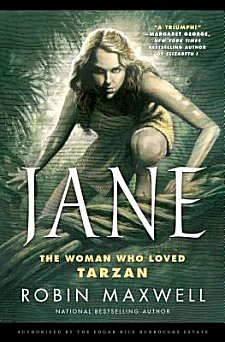 
It's April, 1912 in Chicago, Illinois, and Ed Burroughs can't believe the strength of mind and purpose that Jane Porter possesses. In fact, he finds that almost more remarkable than the subject of her talk. Everyone else has spent the past hour shouting her down, refusing to believe anything she has to say about a race of beings that represent the missing link between apes and humans, but Miss Porter refuses to back down from what she knows to be the truth.

Afterwards, Burroughs follows this fascinating woman, and she agrees to talk with him, asserting that his pulp fiction readers might be more amenable to the truth than all the imminent scientists and doctors who refuse to believe the proof she puts right before their eyes.

Jane Porter's story begins in 1905. As the only female student in Cambridge University's medical program, she's much more comfortable in a lab coat than an evening gown. She longs to travel around the world searching for fossils that will prove the evolutionary theories of-- not only Charles Darwin-- but of her beloved father. When Ral Conrath, an American explorer, persuades Jane and her father to join him on an expedition into West Africa, father and daughter can't believe their luck.

Jane finds Africa and the jungle every bit as exotic and spellbinding as she'd imagined, but when disaster strikes the expedition, she finds the answers to her questions all wrapped up in one extraordinary man: Tarzan of the Apes.

I wanted to read this book because I've loved the story of Tarzan and Jane ever since the local television station showed old Tarzan movies starring Johnny Weissmuller and Maureen O'Sullivan on the weekends. Like Jane in Maxwell's novel, the usual feminine pursuits held no allure for this tomboy, and I was attracted to the idea of people living up in trees (since I spent so many hours climbing them) and having wild animals as friends. The local library also had all of Edgar Rice Burroughs' Tarzan novels, so I spent some of my arboreal free time reading of the ape man's adventures.

Maxwell's novel is the first version of the Tarzan story to be written by a woman and authorized by the Edgar Rice Burroughs estate. Its publication marks the 100th anniversary of the original Tarzan of the Apes. Maxwell knows her stuff, and the book contains everything old and new fans of the Tarzan story will want to read. Problem is, the older fans who know the tale by heart may find large portions of the story very slow going, as I did. I almost put the book down never to pick it up again because of the glacial pace.

It wasn't because the character of Jane isn't alluring; she is. But ask any fan who's been disappointed in the new remakes of Tarzan films, and you'll hear one familiar refrain: the story doesn't work until Tarzan and Jane are together. They are a team. The details of Jane without Tarzan may be interesting, but there's no real spark until Tarzan appears-- and the very same holds true of Tarzan. They are the perfect soulmates: willing to learn everything the other has to teach, and both containing the wildness the other craves.

Once Maxwell gets the two of them together,  the book does pick up speed, but my interest didn't fully engage until the last fifth of the book when the author adds new grist to the mill. Once those new elements to the plot are included, I began reading with a smile on my face. This book may be slow going for those readers-- like me-- who are very familiar with the story, but what I'm hoping is that Maxwell's work will draw in many new fans because it's an irresistible story that's weathered an entire century very well indeed.