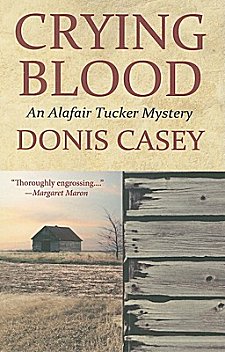 First Line: There was no place left to hide.

It's the autumn of 1915 in rural Oklahoma. Taking advantage of a lull before it's hog butchering time, Shaw Tucker, his brother James, and their sons go on a hunting trip. Deciding that a derelict farm their stepfather bought years ago should be a prime location to find game, they're shocked when one of the dogs retrieves an old boot-- with the human foot bones still inside. The dog then leads the men to a shallow grave that contains a skeleton with a bullet hole in its skull.

Knowing they've got to go get the sheriff in the morning, men and boys go back to camp and bed down for the night. Sometime later, Shaw wakes up to see a pair of moccasin-clad feet walking past his tent. Giving chase, Shaw loses track of the visitor so completely he wonders if he dreamed the whole thing... including the part where he could swear a ghostly voice called him by name. Dream or no dream, once Shaw's home, he just can't shake the experience.

They're back on the Tucker farm hardly any time at all when Shaw realizes someone followed him home. It's a young Creek Indian boy who says his name is Crying Blood. Crying Blood insists that he followed the Tuckers home so he could find the white-haired man who killed his brother. Shaw ties the boy up in the barn and leaves for a couple of minutes. When he returns, he discovers that someone has thrust a lance through Crying Blood's heart. The law is on the killer's trail, but Shaw has a hunch that he knows the identity of the white-haired man. The only thing he has to do is avoid the eagle eye of his wife Alafair in order to confront the killer on his own terms.

I was in a quandary with this book. It's part of one of my favorite series, a series that I tend to savor-- reading one only when the next in the series has been published. (I always keep a few books that I know I'm going to love in reserve.) However, when I  managed to obtain a galley of the next book being published in November, I knew I had to read Crying Blood. There is no way I'm going to read this series out of order!

Why, you ask? Because Donis Casey has created one of the deepest, richest cast of characters in fiction. Alafair Tucker and her husband Shaw have ten children, ranging in age from mid-twenties to three. The children all have their own personalities, and as they grow, they change... just like real people. The twelve Tuckers aren't the only cast members either. There are Alafair's and Shaw's parents, brothers, sisters, nieces, nephews, in-laws and almost in-laws. With a cast this large, you'd think you would need a score card, but you don't.

This large cast is a very real part of the world they live in: Oklahoma farm country at the turn of the twentieth century. It allows the author to shift the focus of her stories from one part of the family to another, as she has done here in Crying Blood. In earlier books in the series, Alafair has been at the heart of the story. Here she takes a backseat to her husband, Shaw, but she still makes her presence felt-- especially when she accompanies the sheriff on a journey in Ford Model T.

By shifting the focus of the story from Alafair to Shaw, we get to see the very real-- and very strong-- bond between the two, and the night that a sleepless Alafair wanders the farmhouse in the wee hours of the morning, knowing that her husband is in harm's way, will bring a lump to any loving partner's throat.

Donis Casey writes an excellent historical mystery series. She immediately whisks the reader into the world of turn-of-the-century Oklahoma farmers, and she creates strong, believable mysteries for her characters to solve. She's also adept at adding a bit of humor in the right places. All that, and she supplies period recipes at the back of the book. In each of her books, Casey provides food for the body, food for the mind, and food for the soul. If that sounds like a winning recipe to you, pull a chair up to the Tuckers' table. There's always room for more.