The Case of the Deadly Butter Chicken by Tarquin Hall 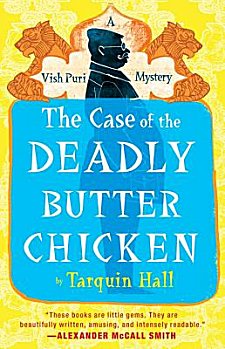 First Line: Stripped down to his undergarments and tweed Sandown cap, Vish Puri stepped onto his wife's old set of bathroom weighing scales.

At his wife's insistence, Vish Puri attends a fancy dinner hosted by a new multi-million-dollar cricket league. Amusing himself by watching people come and go from the banquet room, he is right on the spot when the father of one of the players eats some of the butter chicken on his plate and dies, seconds later, of poison.

Asked to investigate, Vish finds the case leading into the heart of illegal gambling...and deep into a country Vish loathes: Pakistan. During the 1947 Partition of India, several of Puri's family members were massacred in Pakistan, and he has vowed to never set foot on its soil. But in order to solve the case, he must go. What he doesn't realize is that his own mother, his beloved Mummy-ji, has many of the answers he needs.

Once again, Tarquin Hall led me straight to the heart of modern-day India-- the sights, the smells, the mindset of a fascinating country. He also taught me a great many things about the 1947 Partition of India of which I was not aware. (Who says you can't learn anything by reading mysteries?) In the book, Vish Puri is conducting two investigations: one involving illegal gambling and cricket, the other a mysterious (and often hilarious) case of someone who's going around shaving off the mustaches of men who hold records for the hairy appendages in India's own version of the Guinness Book of Records.

The levity of the mustache case was needed because many of the details of the other case were heartbreaking. Was I surprised when Mummy-ji turned out to be such a good investigator in this book? Not at all, but then I've had the pleasure of reading the previous two books in the series-- something I hope all of you experience as well. Not because you need to read them in order to make sense of this latest book, but because they are so informative-- and so much fun.

Hall does a marvelous job with the dialogue, bringing the cadence of speech into play without making it confusing. And the descriptions of the food? Mouthwatering! My husband and I now eat an Indian meal at least once a month simply due to Hall's books. For those readers who want to understand more and experience more of modern-day India, Hall includes a glossary and recipes in the back, and although I normally bypass things like this in other books, I don't when it comes to a Vish Puri book.

I can't recommend this series highly enough for readers who enjoy good mysteries, good food, wonderful characters, and a touch of light-hearted fun amidst all the seriousness. You and your armchair are in for a treat when traveling to Vish Puri's India!