A Fresh Set of Eyes by Liz Strange 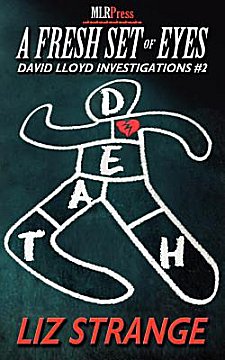 First Line: The man struggled with his bulky load, at one time stumbling down onto his knee, bringing about a surge of pain.

David Lloyd has barely recovered from the events in the first book in this series, Missing Daughter, Shattered Family, when a mother turns to him for help. She and others have been putting money into a fund to reopen the case that sent her son and another young man to prison. She thinks David is the right person to investigate the case.

He barely scratches the surface when he learns that there's a good reason why so many people think these two young men are innocent of the brutal murder of two young brothers. The police investigation was shoddy and the evidence non-existent, and it seems these two young men were put behind bars simply because they'd caused trouble as teenagers and someone had to pay for this crime.

Although he has plenty of other things on his plate (the tense situation with his partner's family and the ongoing rehabilitation of a young prostitute), the farther into the case David digs and the more people he interviews, he knows he's getting closer to righting a miscarriage of justice.

I found this book to be even stronger and more engrossing than the first book in the series. David Lloyd is an interesting character, and through him and his partner, Jamie, author Liz Strange has created a sensitive portrayal of a gay relationship. David has the love and support of his family, and his grandmother has taken the young ex-prostitute, Jenny, under her wing. David has created a family for the young girl-- something she very much needs. Jamie, on the other hand, does not have the support of his entire family, which does cause problems. The relationship between David and Jamie is important, but the main focus of this book is the investigation-- and is it ever a good one!

This is good old-fashioned P.I. work at its best. No matter how difficult, David tracks down all the people who were involved in the case ten years ago. He gets his hands on all the case files, and he gets help from professionals when he needs it. It is a case in which I'd separated all the right pieces, but I needed David's (and the author's) help to get the puzzle put together.

Would I read another David Lloyd investigation? In a heartbeat. These books have characters that you grow to care about, and the mysteries really make you think. Do you have to read the first book in the series before beginning A Fresh Set of Eyes? No, not at all, but you may find yourself wanting to go back to see how and why David got his start in the private eye business.