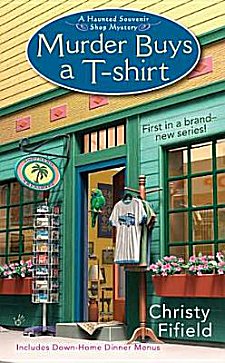 If only her interfering cousin Peter were the only fly in Glory Martine's ointment. Orphaned at the age of seventeen, Glory and Peter are joint inheritors of their uncle's souvenir shop in Keyhole Bay, Florida. Living in Alabama, Peter believes he's the "idea man" even though he hasn't got a clue about retail, or Southern Treasures, the souvenir shop stuffed with collectibles and mementoes of bygone days that Glory runs.

But Peter isn't the only problem. Bluebeard, a cantankerous parrot that Glory also inherited from her uncle, has been trashing the shop at every opportunity, and she's in a quandary. She's beginning to think that the shop is haunted by the ghost of her dead uncle, but she's too afraid that her friends will think she's nuts if she shares her concerns with them.

Then the local football hero dies in what everyone believes is a tragic accident involving a popular teenager who combined drinking with driving. When the talkative Bluebeard keeps insisting "It wasn't an accident!" Glory shares her worries with her best friend-- and her best friend takes it seriously.  Now... how does Glory go about proving young Kevin Stanley's death wasn't an accident without spilling the beans about her resident ghost?

Being a fan of the Georgiana Neverall series written by this author (under the name Christy Evans), I looked forward to this start of a new series. I wasn't disappointed. Murder Buys a T-Shirt is a low-key, light and fun read. The setting of a small town in the Florida panhandle that depends on tourism hits all the right notes, and the characters are a quirky bunch that can sustain a series over several books. Just enough is revealed about Glory's uncle to make me want to know more, and the paranormal angle is deftly handled. In fact, a scene with Glory and Bluebeard toward the end of the book brought a tear to my eye.

If you're in the mood for some light-hearted fun that leaves you wanting more, I suggest you give this first book in the Haunted Souvenir Shop series a try!