Don't Die Under the Apple Tree by Amy Patricia Meade 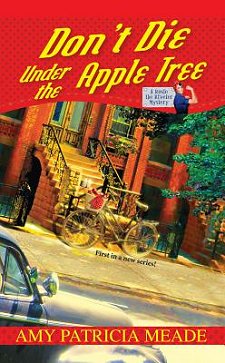 First Line: "Rose Doyle Keefe." The petite thirty-two-year-old lifted the lapel of her tan wool coat to display the badge that identified her as an employee of the Pushey Shipyard Corporation, Brooklyn.

When Katie's husband is killed in action, she and her infant son move in with her older sister, Rosie, whose husband enlisted four months previously. In order to pay the bills and have money left over for food, Rosie has gotten a job at the Pushey Shipyard Company. It's hard, demanding work made no easier by the fact that the men working there resent the women's presence and want them all to disappear back to their kitchens.

In fact, one of the men on Rosie's crew goes out of his way to force Rosie to quit. His plan works, but not in the way he'd expected. Rosie does get fired-- after she loses her temper and lets the man know in no uncertain terms what she thinks of his cheap tricks. When in the foreman's office, Rosie cools off a bit and asks to be kept on. The foreman lets her know-- in no uncertain terms-- just what he expects her to do in order to keep her job. What he gets for his effort is a good whack upside the head with a heavy duty metal stapler before Rosie leaves the premises.

She wanders around for a few hours, trying to calm down and think of what sort of jobs are available for her to apply for before she heads for home. She's not in the apartment for long before there's a knock on the door. It's a policeman who brings her in for questioning. You see, that foreman Rosie whacked upside the head has been found murdered, and there are all too many witnesses at the shipyard willing to tell the police how dangerous Rosie is with a stapler.

Getting the strong impression that she's going to be charged with murder, Rosie figures the only way to clear her name is to return to the shipyard to get her job back. Once she's back on the inside, she'll be able to learn who really had it in for the slimy foreman.

This is a fun, light mystery that read very quickly. Meade's New York City setting during World War II hits the spot and gives the reader an excellent idea of what women had to face when applying for jobs left vacant by men who have been called to serve in the armed forces.

Rosie and her sister Katie are strong likable characters, and the handsome policeman, Rosie's absentee husband, and the sisters' mother are characters just itching to have their share of the limelight in future books. The whodunit is rather easily solved, but the why and the what are not. Between trying to figure out what was going on and becoming acquainted with the setting and the characters, I find myself looking forward to more books about Rosie the Riveter. This series shows a lot of promise.

Genre: Cozy, Historical Mystery, #1 Rosie the Riveter
Rating: B
Source: Purchased at the Poisoned Pen
by Cathy at Friday, August 31, 2012