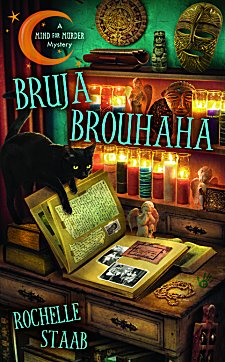 First Line: Nick Garfield, my boyfriend and college professor of mainstream, arcane, and bizarre forms of religion, took four chunks of unshelled coconut from the Santeria altar and set them in my hand.

Practical psychologist Liz Cooper and occult professor Nick Garfield are celebrating the sixtieth wedding anniversary of their hosts, Paco and Lucia Rojas, devout Santeria practitioners who own the historic Botanica Rojas near MacArthur Park in Los Angeles. The evening turns to tragedy for the small group of friends when Paco is killed in a drive-by shooting.

Lucia, completely devastated by her loss, blames the locals for the growing crime in the area, and she casts a hex on the neighborhood. Strange things begin to happen, accidents are on the rise, and Lucia's neighbors begin calling her "bruja" (witch). They turn on the elderly woman who's always been their friend, and they want her gone.

With the way the locals are behaving, Lucia is definitely in harm's way, and it's up to Liz and Nick to solve Paco's murder before anything happens to Lucia.

I often hear talk of a "sophomore slump" when referring to the second books in series. These second books allegedly tend to be weaker than the first, but that most certainly is not the case with Bruja Brouhaha. Two minor annoyances in the first book were not present in the second (Liz's preoccupation with the color and application of her lipstick, and her mother trying to get Liz back with her alcoholic ex-husband), and I quickly settled down to a very enjoyable read.

The Santeria religion is an interesting one, and I wish there'd been a little more about it in the book, but Staab does an excellent job of showing the behavior of its practitioners and how their beliefs color their perceptions. This series is not a paranormal one; the author focuses on a little-known religion in each book, giving a bit of its history and how it is used by its followers. This allows Nick to flex his professorial muscles while Liz puts her knowledge of psychology to good use.

I liked seeing how a group of people banded together to help a grieving, elderly friend while they still kept their own lives going. Liz, for example, gets notice that she has to move out of her condo, so on top of job and Lucia, she's got that worry to contend with.

I found that I could spot the villain(s) in the book rather quickly; what I couldn't do was piece everything together to know the why. I found myself reading faster and faster in a fruitless effort to figure things out before Liz and Nick. I've grown to enjoy the company of those two; I love learning about little-known religions; and I love watching Liz's mind for murder solve a mystery. When's the next book?