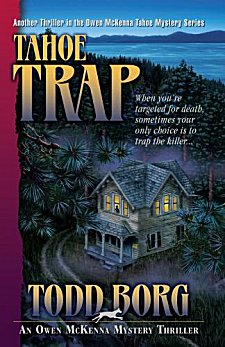 When private detective Owen McKenna answers his phone at 6:30 AM, a young boy's voice cries out, "Help me!" Getting as much information from the terrified child as he can, Owen contacts the police before he and his Harlequin Great Dane, Spot, jump in the Jeep in an effort to locate Paco.

They find him in the forested mountains not far from Lake Tahoe. Paco witnessed his foster mother's murder, and the only way he could escape the notice of the killers was to hide in the back of their truck. Miracle of miracles, Paco managed to escape-- but now there are two hired thugs from Las Vegas looking for him so they can tie up loose ends.

Neither Paco, an illegal immigrant, nor McKenna have the slightest idea why the two killers are after the boy, but McKenna realizes that the killers are not going to stop until their job is done. The only way the detective can see to put an end to the boy's terror is to set a trap... with Paco as bait. This trap is the ultimate in high risk because if McKenna's plan goes wrong, the boy will die.

I know this book is published by Thriller Press, and I know it's listed as a thriller, but that seems such a misnomer. Perhaps I'll start a new subgenre: Thriller with Heart, because Tahoe Trap (and all the other books in the series) have plenty of it. The plots are high octane and the action is faster than a cheetah on speed, but those elements never, ever assume more importance than the characters.

As a former homicide detective, McKenna has a good working relationship with the local police, and he helps them whenever he can. He has a steady relationship with an intelligent, attractive entomologist, and no one has a better sidekick than the Harlequin Great Dane (His Largeness himself), Spot. What makes this tenth book in the series so special is that, for an intense period of time, a child becomes an important part of McKenna's life-- something McKenna doesn't care for at all.

One of my favorite comedians, W.C. Fields, is credited with saying, "Never work with children or animals." McKenna has already broken that rule once with Spot and lived to tell the tale (several times), but Borg's decision to have him deal with Paco is a piece of genius. Paco has learned to be distrustful of people; more often than not he uses an extensive repertoire of shrugs instead of speech. And right now, the only other living being he seems to place any trust in at all is Spot. Everyone McKenna turns to tells him that he's the best person to care for the boy. McKenna-- the man who's never wanted children.

I think I smiled through all the scenes in which McKenna interacts with Paco. He uses a combination of close observation to discover what makes the boy tick and common sense: treat the boy as an intelligent human being. Tell him what's going on. Give him some say in the decision-making process. Paco's been through a lot. He needs to feel as though he's got some measure of control over his own life. McKenna may not want children, but he genuinely cares about people, so he does just fine.

The villain of this piece is sickening, and although some readers may take offense at McKenna using a child as bait in a trap, you have to know that, with characters like Owen and Spot, everything will turn out well.

How well? I suggest you get your hands on a copy of this book and find out for yourself. If you're anything like my husband and me, you're going to find yourself reading all the rest of the books in the series, too.