Only One Life by Sara Blaedel 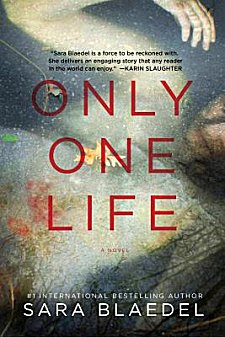 First Line: She could just make out the blue flashes between the densely grown tree trunks, but she couldn't see how many police vehicles were at the scene.

Inspector Louise Rick is called in to help local Danish police with a drowning that's anything but ordinary. Samra, a young immigrant girl, has been found in Holbraek Fjord, a large slab of concrete tied around her waist and mysterious circular marks on the back of her neck.

Samra's life was short and sad, with a father who'd already been charged with assaulting her and her mother. There's no doubt in her mother's mind that her husband would be capable of killing Samra if he believed she had brought dishonor to the family. But Sada insists that her daughter had done nothing dishonorable, even though the girl was supposedly being sent home to Jordan.

Samra's best friend believes her death to be an honor killing. Within days this young girl is also dead, and Samra's younger sister is missing. Louise Rick and her journalist friend, Camilla Lind, have their work cut out for them in solving this case. Is it yet another honor killing in the immigrant community, or is it something else entirely?

This is the third book in the Rick/Lind mystery series and the second to be published in the United States. Author Sara Blaedel is often referred to as the Queen of Danish Crime, but-- to be honest-- I could not warm up to this book or its characters. Almost from the first page, I felt as though I'd missed my bus and kept chasing after it as it disappeared down the street.

Blaedel gives the reader a lot of facts about honor killings before the book even begins. It's a horrible problem that I was made aware of here in Phoenix in 2009 when four boys (aged 9, 10, 13, and 14) lured a developmentally disabled 8-year-old girl into a shed on the pretense of getting some gum. They then held her down and took turns raping her. What was the reaction of the father of the raped girl? The man told the case worker and a police officer, "Take her. I don't want her."  As horrible as that is to anyone who wasn't raised with that cultural behavior, at least the man told those two to take her away. She'd brought shame to his family. He could've killed her.

So as far as the topic of honor killings go, this is an informative book to read. However, so little background on the two main characters was given-- and enough references made to things that happened in previous books-- that I constantly felt frustrated. The plot also hinges on the reader believing in one certain outcome, and since I guessed early on that something else was going on, the false trail seemed clumsily done.

My enjoyment of this book might have been greater had I read the previous book in the series, but series books should be able to stand on their own without help from the ones published earlier. The reader should want to read the older books in order to enhance their experience, not feel as though they have to read them in order to understand the characters and what's going on. As much as I wanted to like this book, I'm going to have to quote the late, great W.C. Fields: "On the whole, I'd rather be in Philadelphia."