At The Poisoned Pen with Tarquin Hall


When I heard that one of my favorite authors was appearing at the Poisoned Pen on Monday, July 16, I knew there'd have to be a national emergency to keep me away. Fortunately there wasn't, so I climbed up into the Jeep and motored crosstown to get there in plenty of time to buy my book and choose my seat.

One thing I didn't count on was the lack of traffic. I'd forgotten that it was monsoon season in the Valley of the Sun, it was Monday, and that a lot of people had probably decided to enjoy a long weekend someplace where the high temperatures weren't in the triple digits. I got to my destination a lot sooner than I'd anticipated: the chairs hadn't even been set up yet. Not to worry! Being early meant that I had plenty of time to buy books and chat with the excellent staff.

I hadn't been in my chosen seat very long when my favorite Arizona book blogger, Gaye of Inside a Book, and her husband came in.  Gaye and I settled in for a chat, and one of the things we began talking about was the wonderful-sounding Indian food that is present all through the books of this night's special guest, Tarquin Hall. Neither one of us was familiar with Indian cuisine. My husband, Denis, is a fan and has been missing his curries and other favorite dishes since he moved here. I had no clue where to find a good Indian restaurant. As I told Gaye, "I'm from the cornfields of the Midwest. We don't do Indian food there!" As we were talking, I'd noticed that an Indian lady sitting in the row in front of me was listening to our conversation. It was at this point that she turned to face us, and she began giving us several recommendations for restaurants to try. The evening was getting better and better!

It was only when the owner of the Poisoned Pen, Barbara Peters, and Tarquin Hall came out to take their seats that one of my carefully thought-out plans went awry. At all the other author signings I'd attended, the author sat in the chair to the left, with Barbara to the right, so I had carefully chosen a seat on the aisle with the perfect vantage point to take photos... if Tarquin were sitting on the left. *Sigh*  At that point, it was too late to move, and I couldn't move much at all because a camera had been set up behind me for a live feed on the internet. I just had to cross my fingers that I would be able to get some decent photos of the proceedings. 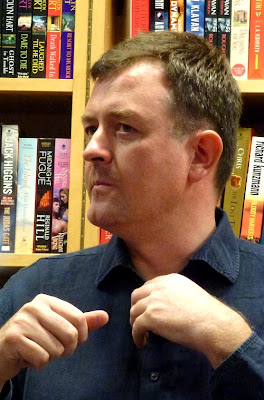 For those of you who haven't read any of Tarquin Hall's three books set in India that feature private investigator, Vish Puri, I urge you to get your hands on them! Not only are the descriptions of the food mouth-watering, the mysteries intriguing, the cast of characters in a league of its own (and often hilarious), but-- last and certainly not least-- modern-day India comes to life in all its complexities. Yes, this is a series that I'll rave about to anyone who'll listen!

Hall told us that he never set out to write a book of fiction about India, let alone a mystery, but after writing a newspaper feature in the Sunday Times about Indian private detectives handling matrimonial cases, he began to see how he could create a series based on an Indian private investigator that would allow him to tackle many of the issues in modern India about which he wanted to write.

In The Case of the Deadly Butter Chicken, Hall originally wanted the story to have a Pakistani character's murder in India link back to the Partition of India, but there were logistical problems. However, the Indian Cricket League provided another avenue to set up the story. In this third book, Vish Puri travels to Pakistan-- a country he hates and one he never wanted to visit-- so when he does arrive there, his impressions of the country are quite telling.

One of the delights of the Vish Puri mysteries is the cast of characters-- especially Mummy-ji, who was only supposed to be in the first book but keeps finding her way into each new one. She's a very determined woman, is Mummy-ji, and she has an important part to play in this book. Vish Puri's family shows family life in India as it really is. Everyone in the family is involved with everyone else's life and decisions, and it's only if one is a bit eccentric and strong enough that one has a chance to march to a different drummer. 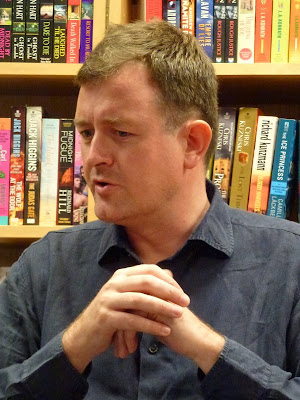 Another thing discussed during the evening was the growing importance of vasthu sastra, the Indian version of feng shui. Hall told us that, as a certain segment of the Indian population becomes richer, they seem to be growing more and more afraid of losing their wealth, hence the reliance upon things such as vasthu sastra.

When asked how his books are received in India and England (Hall is British), he admitted that he had been terrified when the first book was published in India. He had no idea how people would react to it. Fortunately the books have been very well received. England is another story, one of the reasons being that the British seem to prefer books set in India during the British Raj.

Where are his books the most popular? In France, which has been a huge crime fiction market since the 1920s.

What's one of the more interesting comments he's read about his books? Hall said that would be the comment made by an Indian reviewer in the Guardian who said that more foreign white characters would make the books more authentic. That comment is a bit of a head scratcher, and it's something that Hall has no intentions of doing. His primary concern is showing readers modern India, and let me tell you, he's found an excellent (and entertaining) way of doing so! 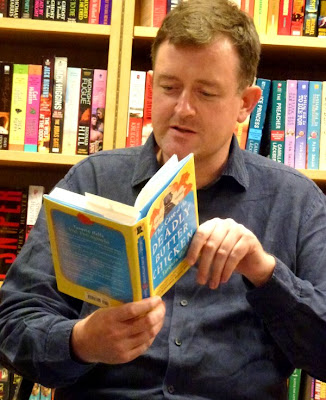 The evening ended with Hall reading us all a few paragraphs from The Case of the Deadly Butter Chicken. Fewer than twenty people attended, and although I can mourn the low turnout for an excellent writer, I have to admit that the audience seemed more involved than when there are larger numbers. There was so much information shared and so much laughter. We all enjoyed ourselves immensely.

There was even an opportunity to learn about the readers who attended. Two women were librarians who are eating their way through all the food mentioned in the Vish Puri books. (Yes, they visited an Indian restaurant before coming to the Poisoned Pen!) Four more women were all members of the same book club, and they read primarily Indian literature. We were a small, select group. We all love the books and are fascinated with Indian culture and history. What better way to expand our knowledge than by spending part of an evening with Tarquin Hall at the Poisoned Pen?
by Cathy at Sunday, July 22, 2012