At the Poisoned Pen with Martin Walker


It was Poisoned Pen Week for me, beginning with the Poisoned Pen Conference at the Arizona Biltmore Friday, July 13; continuing with Tarquin Hall signing his latest Vish Puri mystery, The Case of the Deadly Butter Chicken; and-- the pièce de résistance-- Martin Walker signing his latest Bruno Chief of Police mystery, The Crowded Grave, at his first ever appearance at my favorite bookstore.

As you can see to the right, customers attending the book signing weren't the only browsers in the store!

What made this evening so special for me was that Denis got to come with me, and by evening's end, he was very glad he did.

Of course we got there early, even though there was a bit more traffic on the streets this time. Being early was definitely in my favor because, not only did I get my hands on a copy of the fourth book in the Bruno Chief of Police series, The Crowded Grave, I also snatched up the very last UK copy of the fifth book, The Devil's Cave. (I worked in retail too long not to have lightning quick reflexes.)

The evening started off in true Gallic fashion with pâté de foie gras served on French baguette and small glasses of Sauternes wine. The turnout was small, so there was even enough for seconds, which was fortunate because everything was delicious.

Before the other attendees arrived, I realized that the room was set up differently, and I asked Will Hanisko about the change. "We're going to have some video presentations," Will replied.


Sure enough, the video began while we were still sipping our wine. Poisoned Pen owner, Barbara Peters, and author Martin Walker had put together a collection of short videos and photographs of the French countryside, French cuisine, and Martin's basset hound, his car, and his home in France. Those two were determined to immerse us in all things French. (And we were all very willing subjects.)


During the presentation, Walker told us that German television is making a series based on the Bruno books, so I'm already wondering about DVDs and subtitles! He also mentioned that he does many of the things that Bruno does in the books. For instance, each January, he helps with the hog butchering in the village. He and the local children are allowed to stand in an icy stream and clean out the pig intestines. In return, he gets one ham that's been cured for six months in a large tray of salt.  By the end of the presentation, Walker admitted, "I'm getting homesick already!"

At this point in the evening, Peters turned her chair over to author Dana Stabenow, who conducted the rest of the interview.

Walker's love of France began when he was a young boy. In 1961 he spent Easter in Paris with a French family, and he's been fascinated with the country, its history and its culture ever since. He took us on a very abbreviated tour through French history and politics. In the village where he lives, there are neighbors who still won't speak to each other because some were collaborators during World War II. He lives close to the Lascaux system of caves which are world-renowned for their prehistoric cave paintings, and another nearby cave is one of the locations the Resistance used to stash their weapons during World War II. "I feel as though I live in the middle of a movie set!" Walker told us.

It was right about this point that we all admitted that some of our favorite scenes in the Bruno books are the ones in which villagers work in concert to evade European Union food inspectors. "That really does happen," Walker replied.

Stabenow asked Walker about his résumé: He's a Scot with 25 years spent working for the Guardian newspaper as bureau chief in both Moscow and Washington, DC; he knew President Clinton when Clinton was attending Oxford; broadcaster for the BBC; Editor emeritus of UPI; Senior Scholar of the Woodrow Wilson International Center for Scholars; and he's presently Senior Director of the Global Business Policy Council, a private think-tank for CEOs of major corporations based in Washington, DC. (And that's an abbreviated list, folks. He's done a lot he didn't share with us.) Needless to say, this man travels. A lot. When asked, his wife, Julia, says that his address is "Seat 2A Lufthansa."

Walker gets up early every morning and writes 1,000 words. He follows Ernest Hemingway's advice and never stops at the end of a chapter or a scene, but in the middle. (It's easier to pick up where you left off that way.) He's just written his first Bruno short story which will be included in a crime anthology launched at the next Frankfurt Book Fair. (Donna Leon will also have a story in this anthology, and it will also contain a long-lost Agatha Christie story.) 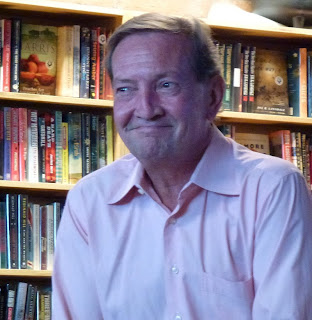 He spoke lovingly of his two daughters. The youngest, Fanny, is a performance poet who recently won a Gold Medal at the Poetry Olympics. His elder daughter, Kate, not only is responsible for Walker's website, she covers the Formula 1 racing circuit.

After talking about his family, Walker then went on to tell us about truffles and why pigs are so good at finding them. It seems that truffles smell very similar to pig sex pheromones, and that explains quite a lot!

One of the most fascinating parts of the entire evening was when Stabenow asked Walker about his work at the think-
tank. One of the things they've been studying quite closely is the birth rates of countries around the world. 2.1 is considered a stable birth rate. Anything below that, and a country will be facing problems in the years to come. At 1.3, Russia's birth rate means that in sixty years, that country's population will be halved. According to statistics, the Islamic birth rate is "dropping off a cliff." The birth rate in the US is now higher than that of Mexico and Brazil, and with the effects of China's one couple/one child policy, China's work force will be greatly reduced in years to come. What does this all mean? According to Walker and the think-tank: America is not doomed to decline; China is not fated to take over the world.

Furthermore, if all their studies and deductions are correct, by the year 2020, the US should be self-sufficient in energy again. Just that one thing will cut the deficit in half. The US will be able to better the Kyoto Carbon Emissions guidelines (even though we didn't sign them in the first place), and we will even begin exporting oil. What a wonderful change to hear someone telling us good news about the future! 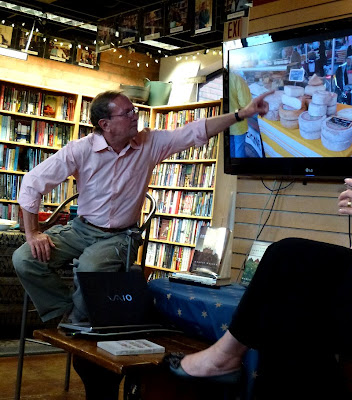 Martin Walker held us all in the palm of his hand at the Poisoned Pen that night. I think we all would've been quite happy to stay there much, much longer, but alas, all good things must come to an end.

What is the one thing that will become a permanent memory for me about this evening with one of my favorite authors?

Martin Walker's smile whenever he speaks of France makes me want to book the first flight out. It is wonderful to hear someone speak with love, with passion, about something so close to his heart.

I challenge anyone to listen to him speak and not feel the very same way about La Belle France.

You may not be as lucky as I and be able to attend an author signing with Martin Walker, but you can get your hands on his Bruno Chief of Police mysteries. His love and passion is evident on each and every page. Experience it for yourself!