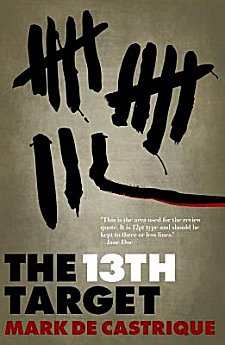 First Line: "Rusty. Have you got any money on you?"

When Russell (Rusty) Mullins' wife dies of ovarian cancer, he feels a real need to take a different direction in his life. Ending his career in the Secret Service, he joins a private protection company based in Washington, D.C., and is assigned to guard Paul Luguire, a Federal Reserve executive and its chief liaison with the U.S. Treasury. The change means that Rusty gets to spend time with his grandchild, and he becomes good friends with Luguire.

Such good friends that when he gets a phone call from a police detective telling him that Luguire has committed suicide, Rusty doesn't believe it. His belief is confirmed by Federal Reserve employee Amanda Church, who once worked with him in the Secret Service. Church has uncovered an extremely suspicious financial transaction initiated by Luguire that now seems to be setting Rusty up. When a bank president is murdered, Rusty does indeed skyrocket to the top of the suspect list.

As Rusty follows a trail of clues, he's joined by a discredited journalist and a police detective who's mere months away from retirement. Someone out there is conspiring to destroy America's financial system, and the Federal Reserve has a starring role in the plan. Twelve targets are known, and time is running out. What-- or who-- is the thirteenth target?  Is this unlikely team of three going to be able to uncover the truth?

I'm familiar with de Castrique's two series set in North Carolina: the "Buryin' Barry" series featuring an ex-cop/ undertaker in Gainesboro, and the Sam Blackman series featuring an Iraqi war veteran who's now a private investigator in Asheville. I was eager to see what he'd do with the thriller format.  As I expected, de Castrique does not disappoint.

The book is filled with fast-paced action, and although the plot is a little unwieldy from time to time, I dare anyone to use the U.S. financial system and the Federal Reserve as the basis for a plot and explain it as well as the author does. I have to admit that when the villain is revealed, I could have slapped myself upside the head-- the person was right out in plain sight from word one, and I was too caught up with other details to pay attention.

As always, de Castrique shines with his characters. Rusty Mullins is an honorable man that you believe from the start. He's fortunate to find Detective Robert Sullivan, a police officer who, although just months from retirement, knows an honest man when he meets one and is willing to go above and beyond the call to see justice done. As the discredited journalist, blogger Sidney Levine is perfect. Through his work in journalism and through his blog, he knows how to investigate, he knows how to get in touch with the more credible conspiracy theorists, and he knows how to flush out the information that Mullins needs. If I have any complaint about the book at all, it's that I would have gladly spent many more pages in the company of these three characters.

Mark de Castrique can write humorous mysteries. He can write mysteries with literary clues. He can also write a mean thriller. If you haven't read any of his books yet, now's your chance!