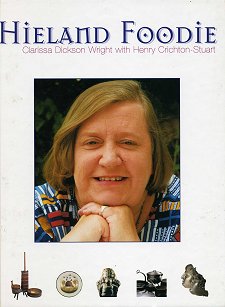 First Line: We are the product of our genetic geographicals; my grandfather was a Glasgow doctor whose main aim, it seems to me, was to bring the preachings of the Plymouth Brethren to the poor of Govan, funded by his Helensburgh practice.

Y'all are probably reeling from shock to see that I'm reviewing a cookbook when my bio down at the bottom of my sidebar states that my dream house wouldn't have a kitchen. Well, since I do not live in my dream house, my home does have a kitchen-- and a husband who appreciates being fed from time to time. So I do know my way around a cookbook, and I have been caught watching an occasional cooking show on television-- which is how I came to get my hands on this particular cookbook.

I first came across the author, Clarissa Dickson Wright, as one half of the team called Two Fat Ladies, a cooking program that was popular in both the UK and here in the US. It was the late Queen Mother's favorite television program, and although the two women were renowned for their love of butter and their almost complete disregard of healthy cooking, I loved the program for Clarissa and Jennifer's repartee and for the tour of the British countryside as they went from place to place (on a motorcycle complete with sidecar) to cook their meals.

Clarissa Dickson Wright is fascinating in her own right: she originally trained as a lawyer, and is the youngest woman ever to be called to the Bar. She also speaks her mind and is much more likely to be seen carrying a shotgun than a handbag, so she's definitely my kind of woman. In this small (112 page) book, she's gathered together a concise history of Scottish cooking from Cullen Skink to Dundee Cake. Each recipe's history is given along with the ingredients, and the book is lavishly illustrated with historic objects and photographs.

If you're wanting a cookbook that showcases the cuisine of modern Scotland, you're not going to find it here. What you are going to find is a very fine collection of easy-to-follow recipes, illustrations, and commentary that defines a nation by what it ate. It's a book that fascinated this reader, and I'm about as far from a foodie as a person can get!

If you've never seen Two Fat Ladies, I have included a film clip at the very bottom of this review.