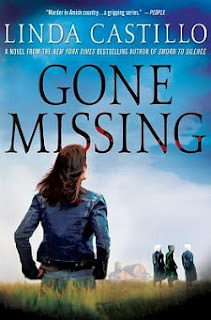 First Line: Becca had always known her life would end in tragedy.

From its heartbreaking beginning to its chill-inducing ending, this book is all about "kids, our most precious resource, and the way we treat them."

Once Amish herself, Painters Mill, Ohio, Police Chief Kate Burkholder is a perfect choice to act as a consultant with the Bureau of Criminal Investigation as they look into the disappearances of two young Amish girls. Not only will she be able to work with John Tomasetti again, but the case will hopefully put her out of range of the town mayor. (He wants Kate to turn a blind eye to the extremely illegal things for which his son was arrested.)

As Kate and Tomasetti start looking into the lives of the missing teenagers, they begin to discover links to cold cases that go back several years. Bodies also begin to turn up, and the investigation becomes a race against time to save those young girls who are still missing.

Amish areas are small and insular, so I wondered how author Linda Castillo was going to prevent "Cabot Cove Syndrome" (the constant appearance of dead bodies in a rather sparsely populated area). Solution: Loan Kate Burkholder out as a consultant in other areas of the state when investigators need an "Amish expert."  In Gone Missing, this has her working with Agent John Tomasetti-- the spice in her gumbo-- which keeps the romantic tension flowing.

A very likable character, Kate is well-respected in the law enforcement community, but she's also very conflicted about many things in her past and present. Since she's no longer Amish, she has a strained relationship with her family, as well as a tendency to empathize with any rebellious Amish youth.

The beginning chapter, which deals with the heartbreaking suicide of a young Amish girl sets the book up perfectly. The girl says just enough to let us know that there's one Amish homestead that isn't picture postcard perfect. In fact, in that one short chapter, Becca makes such an impression that I kept waiting for the tie-in with these present day disappearances. When that tie-in comes, it's much more than I was expecting-- leading up to a spine-chilling conclusion.

I'd only previously read the first book in the series, but not having the information from books two and three did not prove confusing. Castillo gave me just enough information to fill in the blanks, and to whet my appetite for the two books I have yet to read.

For some reason, the Amish hold a fascination for many of us. I grew up very close to an Amish area and visited often with my grandparents when they'd go to the butcher shop, cheese shop, and a grocery store that sold homemade pies, breads, and jams. Castillo's Amish ring true, and even though you may find yourself wondering if things like this really do happen in Amish settlements, she's such a storyteller that belief is willingly suspended as the pages of the book turn. If you've never read a Kate Burkholder mystery, I highly recommend them!