A Deadly Grind by Victoria Hamilton 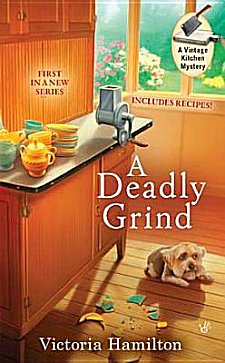 First Line: No one would expect to find a new love at an estate auction, but Jaymie Leighton just had; her heart skipped a beat when she first saw the Indiana housewife's dream.

When Jaymie Leighton, collector of vintage cookware and cookbooks, first set eyes on the original 1920s Hoosier cabinet at the estate sale, it was love at first sight. She didn't know exactly how, but she knew she would make room for it in her own kitchen.

When two people bidding against her start fighting with each other, Jaymie wins the cabinet, loads it in the van, and takes it to her old farmhouse in Queensville, Michigan. The cabinet is in dire need of a good cleaning, so it's left out on the summer porch until Jaymie has time to apply the necessary elbow grease.

That very night, someone breaks into the porch and begins rifling through the boxes of items purchased at the sale, but when Jaymie hears the racket and comes downstairs to investigate, the intruder is dead-- his head bashed in with the meat grinder attachment from the old Hoosier cabinet. Is there something valuable in one of those boxes? Or is there something hidden in the old kitchen cabinet that will keep it-- and Jaymie-- in the middle of a deadly mystery?

Jaymie is in her early thirties and supports herself with a small inheritance and by working a variety of part time jobs. She has a bossy older sister who lives in a nearby city, and her parents come for a visit each summer. Her boyfriend left her six months ago, and her companions are a three-legged Yorkie-Poo named Hopalong and Denver, her antisocial cat. Jaymie loves vintage kitchen cookware, and her penchant for poring through old cookbooks for recipes that she can make the "old-fashioned way" and then adapt for modern cooks has led her to write her first cookbook and submit it to publishers. It wasn't long before I'd fallen under Jaymie's spell.

I also fell under the spell of small town Queensville, Michigan, and Jaymie's supportive circle of friends. Although I'm not a "foodie", I did enjoy Queensville's annual event, The Queen's Tea, in which an elderly couple dress up and play the part of Victoria and Albert during high tea, and the old and new versions of Queen Elizabeth's Cake that are included at the back of the book almost made me start banging and clanging in my kitchen.

There were only two minor annoyances for me in A Deadly Grind. Jaymie is the type of woman who seems to look at any reasonably presentable single man as a potential partner. To someone like me, that annoyance is probably due to a lack of certain hormones and the fact that I never did that in my own youth. However, I will admit that this minor irritant never got to the eye-rolling stage for me.

The other minor annoyance was the fact that many clues seemed to be outlined in flashing red neon. For example: You are a young single woman who's just returned home with a huge piece of furniture that needs to be taken out of your van and hauled into your house. A total stranger appears out of the twilight and offers to help you. As this stranger helps you lug the furniture across the yard, he asks you if you live alone, if you have an alarm system, wouldn't it be a good idea to leave this on the porch.... Any reader worth his or her salt knows that guy's up to no good. (Flashing red neon, see?) Well, one thing's for certain. Jaymie's not going to live long in the mystery series business unless she wises up fast because she answered all his questions truthfully! Not only that, but she keeps things from the police, which is never a good idea. Thankfully all the clues weren't broadcast because at book's end there were surprises for me.

Aside from those technicalities, I enjoyed this first in a series, and I'm really looking forward to the next installment. I may wind up turning into a foodie after all!