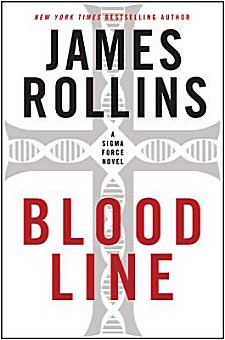 First Line: They once called her a witch and a whore.

Once again that fascinating organization of old, the Knights Templar, provide background for a novel. Of the nine original members of the Templars, only one is not known by name-- and that is the member Rollins weaves his story around. In the eleventh century, this Knight Templar uncovers the Bachal Isu-- the staff of Jesus Christ-- deep within an ancient citadel. This priceless object contains a power capable of changing humankind forever.

One thousand years later, Somali pirates kidnap a young pregnant American woman. Gray Pierce of Sigma Force is enlisted for a covert rescue mission because the young woman is not your average rich tourist: she is Amanda Gant-Bennett, the daughter of the President of the United States. For this mission, the help of two new operatives is enlisted because of their special talents. On board for this rescue are former Army Ranger Captain Tucker Wayne and his military war dog, Kane.

What soon becomes clear is that the kidnapping of the President's daughter masks a much larger and more complex plot. Gray and his fellow Sigma Force operatives are facing a shadowy group which has been manipulating events throughout history... and now they have plans for the presidency.

If you feel the need to devour an occasional high-octane thriller that contains large doses of cutting edge medicine, genetics and technology, you're going to love this book. If you like the occasional read about power-mad thugs who believe they are entitled to carry out any insane scheme they can concoct because you love to grind your teeth and feel your blood pressure spike, this is the book for you. If you have obtained enjoyment from people not following the old actors' adage to never work with children and animals because they always steal the show, you're going to love Kane the war dog. (He's an absolute treasure.) If you like a bit of comic relief, then Kowalski's your man.

Were there any huge surprises in the plot for me? No, unless you count the fact that these characters are much more developed than the characters in most thrillers. Did I feel as though I were missing something by joining this eight-book series with the most recent adventure? Not at all. This book hit the ground running and the action never let up. I will admit that I'd like to check into previous books in the series because I enjoyed some of the characters so much and would like to know more about their backstories.

Was the plot always plausible? No, but-- if you really think about it-- isn't that part of the fun with thrillers like this? Lots of action, lots of things blowing up, you get to root for the Good Guys and hate the Bad Guys, and you even get to learn a few things along the way. Result: a good time was had by all... at least in this house!

Genre: Thriller, #8 in the Sigma Force series
Rating: A
Source: Publisher
by Cathy at Thursday, June 28, 2012