Who Do, Voodoo? by Rochelle Staab 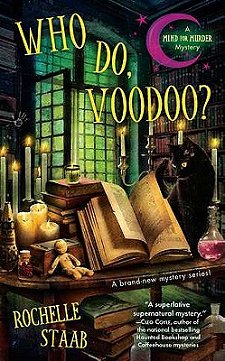 First Line: "Wait until the third date to fool around?"

Clinical psychologist Liz Cooper has a practice in Los Angeles and one of those annoying mothers who loves tarot cards (and Liz's snake of an ex-husband). Liz is pre-programmed not to believe in the occult or the supernatural, but when someone keeps tacking tarot cards to her best friend's door and that friend is later jailed on suspicion of murder, Liz has to set her preconceptions aside to help save her friend.

The best way to do that is to team up with her brother's friend, college professor Nick Garfield who's an expert in the occult. Liz's search for the truth turns dangerous when more people begin to die. Could there really be anything to this voodoo stuff?

Liz Cooper is a strong, calm, likable woman whose only real handicaps seem to be her mother and brother. Nick Garfield is handsome, available and definitely shows interest in the psychologist, but between Liz's mother preferring her ex and her brother not wanting his friend to be romantically involved with his sister, do Liz and Nick have any sort of future?

Liz has been friends with Robin for most of her life, and it's admirable how she (almost literally) puts everything else aside to fight to prove her friend's innocence. The new detective who's got the case is focusing on the obvious to the exclusion of all else, and Liz's brother-- who's also a member of the Los Angeles Police Department-- isn't doing much better. However, in Liz's fight to get Robin out of jail, she does cross the line a few times, which could put the police investigation in jeopardy.

Liz's friend, Robin, comes off as a well-meaning but easily distracted person who can't seem to believe that what is happening to her is real. Liz gives her excellent advice which Robin refuses to take several times-- to the point where the reader may begin to think that this woman is really going to wind up in prison.

For those of you who shy away from books with a paranormal slant, there's really no reason to stay away from this one. There's extremely little hocus-pocus or things that go bump in the night. However, there is quite a bit of information about voodoo and similar religious beliefs that are commonly associated with it, and for that reason alone I found the book very interesting to read.

What will keep me coming back for more are Staab's characters, Liz and Nick. They are an attractive couple with plenty of smarts and good chemistry between them. I like how they solved their first case and look forward to others.

Genre: Cozy Mystery, #1 Mind for Murder
Rating: B
Source: Paperback Swap
by Cathy at Thursday, May 24, 2012