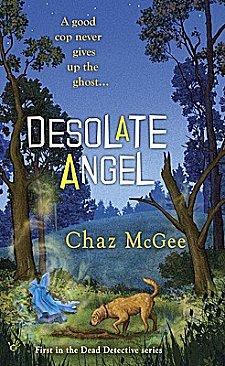 First Line: A man lies dying on the grime-encrusted floor of an abandoned house on the banks of the Delaware.

The man who lies dying on the dirty floor is Kevin Fahey, a second-rate cop, a mediocre husband and father, and the narrator of this book. As Fahey himself now says:

"I am a ghost haunted by my regrets, doomed to walk through a world that is neither here nor there, tasting my fate in my solitude, seeking a redemption I fear will never come."


When it is proved that a young man Fahey and his partner sent to prison for the death of his girlfriend is in fact innocent, this dead detective knows that his best shot at redemption lies with Detective Maggie Gunn, a gifted, empathetic investigator who's taken on the task of not only finding the real killer, but of going through all Fahey and Partner's old cases to see if there's anything else in the files that needs to be straightened out. Although ashamed of how he threw away his life, Fahey is determined to be of as much help to Gunn as he can. Complicating matters is that Fahey's partner, Danny Bonaventura, has yet to retire and isn't taking this examination of the old files very well.

For those who aren't big fans of paranormal mysteries, you'll be happy to note that Kevin Fahey does not become Super Cop on The Other Side. There's very little he can do in this first book to influence the living except by planting the occasional thought in someone's mind. It will be interesting to see if he acquires new skills the longer he remains a ghost.

Maggie Gunn is the type of police officer we wish they all were-- compassionate with the families of victims, respectful (but not obsequious) with her superior officers, Maggie seems able to channel the Energizer Bunny and the most tenacious bulldog as she searches for a truly scary serial killer. In Desolate Angel, the killer's identity is no secret; it's how they're going to find the evidence they need to put him in jail that fuels the action. Knowing the killer in this case ratchets up the suspense by several degrees, and Fahey's despair at being unable to help is palpable.

I ordered this book primarily because I liked the different approach. This time the main character is a failure, a screw-up who gets a second chance to correct his past mistakes, and the author (Katy Munger writing as Chaz McGee) uses that to excellent effect. Aren't there times when every single one of us has wished for a second chance? Kevin Fahey has the best real, live partner to help him with his quest. I really look forward to its continuation.