Scene of the Crime with Author Adimchinma Ibe!

I first became aware of Adimchinma Ibe when I read his debut novel, Treachery in the Yard, the first Tammy Peterside mystery. This Nigerian writer is very talented, and readers can learn a great deal about his country through reading his books. Tomorrow you'll be able to read my review of the third Tammy Peterside mystery, Cronies, so stay tuned for that. Before we move on to the interview, I'd like to share a short bio and a synopsis of Treachery in the Yard provided by the author:

Adimchinma Ibe is a writer and was born on May, 05 1977 in Umuehihie – Amuda, Isuochi, a small town in Umunneochi L.G.A, Abia State of Nigeria.

Although Treachery In The Yard isn't the first novel he's written, it is his first novel to be published. The novel is about Police Detective Tammy Peterside who is drawn into the politics of Nigeria when a bomb goes off at the home of Pius Okpara, an important politician in the middle of an angry nomination battle to head the National Conservative Party’s banner.

A previous “peace meeting” between Okpara and his rival ended up in fighting between their supporters which left one person dead. Peterside is not happy with the investigation of the bombing, or with the politics involved.

When he learns that his mentor is protecting the suspect, Peterside knows something very wrong is going on, and he becomes obsessed with getting to the truth. His Chief does not see himself as corrupt, but rather as a balance between the different forces threatening to tear Port Harcourt apart. The Detective is able to bring them all to justice, but learns only at the end that the Chief has been in effect protecting him, grooming him as an eventual colleague.

If you'd like to know more about the author, you can check out his pages on Facebook and Twitter, and read other interviews given on Romance Meets Life and Geosi Reads. You can also read more about his three published novels at The Book Depository. 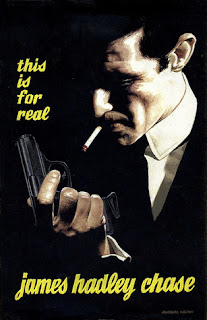 James Hadley Chase’s This Is For Real, first of the Mark Girland series. Robert Carey was an American spy, who had defected to the Eastern bloc. When the news leaked out that he had changed sides again, a ruthless manhunt was on - from the glamour of Paris, to the scorched wastelands of West Africa. There is CIA agent Rossland who does not recognize trouble when it sits on his lap. There is astute Girland, a dissolute, ex-CIA agent, who is greedy for money and women, but still has scruples. Janine Daulney, who fatally plays both ends against the middle. Malik, the ruthless blonde, green-eyed Soviet agent, who stops at nothing to achieve his ultimate goal. And there is sinister Radnitz who has his own personal reasons to trap Carey and obtain certain papers from him. To achieve this, Radnitz hires Girland.... but Girland is not that unscrupulous....

Well… I don't have much free time, but when I do, I listen to music. I do it all the time when I am at home, even if I am doing something else, even though I'm not fishing for trade publishers anymore. But I do the same things outside of writing that I did while I was still pitching my novels to trade publishers: Wake up around 2 AM in the morning, write till around ten in the morning, take a break that consists of brunch and a nap, watch movies, go out and enjoy being outdoors, hang out with friends, etc. I found out that for me, the difficult part was figuring out what to do with my free time; finding new things I will enjoy doing outside of writing, since it was all too easy to fall back on the same old habit or routine.

Samuel L. Jackson. I specially love his movie, "Pulp Fiction," where he was cast as Jules Winnfield. Still love that movie!

It’s easy to guess… Mark Girland. Still my favorite even if I seem to live in the past!

I wish I had written James Hadley Chase's Mark Girland Series for one, because he always emphasized that crime or lust did not pay. It is a pity that Girland appeared in only four novels, and that the savvy hero, Girland faded into quiet oblivion, as compared to Ian Fleming's James Bond, who continues even today, in all his flamboyance.

When I first heard I was going to be published, I had mixed emotions. I didn’t know quite how to react until it registered that I was going to be a published author finally. Afterwards, it felt great! I knew how hard I had worked to make it happen, and once I realized that, it was a fantastic, warming feeling.

One of the great advantages of ebooks is that anyone can write and sell one themselves – anyone can become author and publisher in their own right. I read on the internet that most trade publishers' chains went bankrupt last summer and all houses have cut their lists because there are fewer and fewer point of sale venues.

So, with the low prices for the books, the ease of downloading, the ease of publication, the high royalties, the saving of paper, and many other advantages, I really do not see what there is to dislike here.

It's a gamble, but several new writers that couldn't find publishers have had success selling ebook versions of their novels on the internet. I don't know how long that's going to last. The book market is really imploding in the U.S., while ebook sales just continue to grow, and it may be a better bet to try catching this new wave. Paper books are still my favorite though. They don't need batteries, and I can read them just about anywhere. Time will tell whether ebooks are a viable alternative!


Thank you so much for spending this time with us. It was great to have this opportunity to get to know you a little better.