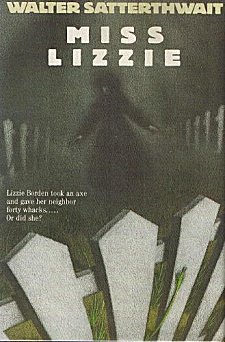 First Line: The days were longer then, in that long-ago summer at the shore, and the air was softer, and the sunlight more golden as it winked and wobbled off a bluer sea.

It is 1921 and Prohibition has just begun. Thirteen-year-old Amanda Burton is staying with her father, stepmother and older brother in a house along the Massachusetts coast.

Amanda finds out their next-door neighbor is the notorious Lizzie Borden, the woman who was acquitted of taking a hatchet and cutting her father and stepmother to pieces. Amanda meets Lizzie, and they become friends-- meeting almost every day so Lizzie can teach the young girl card tricks.

Amanda and her brother loathe their stepmother, and when Amanda wakes up on the hottest day of the summer to find the woman hacked to bits in a bedroom in their house, suspicion falls squarely on the shoulders of neighbor Lizzie. Amanda doesn't believe that Lizzie did it (she doesn't believe Lizzie killed her parents either), and with Miss Lizzie taking the initiative to hire both a lawyer and a Pinkerton detective, the unlikely pair sets out to find the real killer. Their investigation uncovers a nest of secrets. All they have to do is find the guardian who's willing to kill to keep his--or her-- secrets hidden.

Satterthwait's writing style captured me from the first paragraph, and another scene set in the fog actually had the hair standing on the back of my neck. The story is told by a much older Amanda who seems very nostalgic for the innocence she had during those days. As the story progresses and suspicion shifts from one person to another, the reader can easily begin to doubt all the characters-- even Amanda herself.

Satterthwait's poetic style brings the era to life in a swiftly moving plot that shifts nimbly through the fog of secrets and suspicions until the reader is deliciously lost. Amanda and Miss Lizzie are now one of my favorite detective duos, and I have more of the author's books on their way to my doorstep.

Genre: Historical Mystery
Rating: A
Source: Paperback Swap
by Cathy at Thursday, May 17, 2012