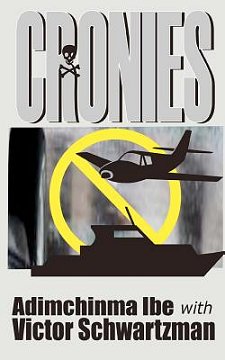 First Line: It was a hot, sunny April afternoon, so I hated it.

It's hot in Nigeria, and Detective Tamunoemi ("Tammy") Peterside hates the heat. He'd rather try to stay in places that have air conditioning, but when the call comes out that there's been a murder, Tammy has to leave the air conditioning and go out to the scene of the crime.

Edward Okeke was shot five times in the chest and once in the head in what appears to be a gang execution. The only lead they have is a witness who can identify a man getting into a car at roughly the same time the murder occurred. If you've read any of the Tammy Peterside books, you know that being a witness is an extremely dangerous occupation, and it's no different in Cronies. The witness is killed, and Tammy has to begin turning over every stone he can find in order to track down the killer.

Detective Tammy Peterside doesn't always follow the rules, but it's the only way he can survive to do his job in a country that's rife with corruption. He also has a bad track record with his girlfriends-- treating none of them particularly well-- but he didn't have much time to mistreat anyone in this lightning-fast thriller. Peterside may be flawed, but he will not stop until he can close a case and see justice done.

Adimchinma Ibe's portrait of Nigeria is often chilling, and it adds an incredible amount of detail to his books. Peterside (who's the type of cop who does his thinking while he's running) and his paperwork-loving partner make a very effective crime-fighting duo. While Peterside forges ahead to a solution, his partner follows along "dotting the i's and crossing the t's" in his wake.

Seldom do I ever complain about the length of a book, and when I do, it's normally to say that the book is much too long. In the case of Cronies, I'd have to say that the opposite is true. The book feels too short. Peterside is such an interesting character, and the case gets solved so quickly that I'd love to see more "meat on the bone" to develop Tammy as a character and the storyline as well. I also have to say that the editing of the first twenty to thirty pages of the book were rather uneven, with awkward phrasing or incorrect word choices (for example, "flare" instead of "flair") that slowed down my reading a bit. Fortunately the editing became much smoother and was no longer an issue for the rest of the book.

I look forward to reading more of the adventures of Detective Tammy Peterside, and I recommend them to anyone who likes fast-paced mysteries set in parts of the world that may be unfamiliar.

Genre: Thriller, #3 Detective Tammy Peterside
Rating: B-
Source: Received a copy from the author in exchange for an honest review.
by Cathy at Tuesday, May 22, 2012