The Boy Who Stole the Leopard's Spots by Tamar Myers 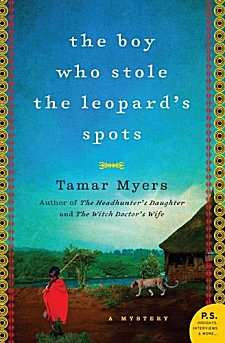 First Line: It was much cooler in the canyon that lay in front of, and below, the village.

Legends surround the birth of twins to a king in the Belgian Congo of the 1920s. This was the time when headhunters and cannibals still followed the old ways, a time when the birth of twins was a bad omen that must be dealt with swiftly. Due to his cunning, the king's twins both survived and grew to manhood.

Fast forward to the late 1950s. As independence for the Congo grows nearer, even the remote town of Belle Vue becomes acquainted with the stirrings of upheaval. Self-professed spiritual leaders travel through almost daily, speaking to large groups of natives, telling them of the delights to come-- to when they will inherit all the goods of the whites and all their knowledge of how to operate the technology. Some whites are nervous, others-- like Madame Cabochon-- who were born in the Congo and have lived there all their lives, seem willing to fight for their rights to remain in their homeland.

Into this unsettled time for Belle Vue arrive some strangers, a huge snake, and a horrendous storm that literally divides the town in half. As one person, then another, dies, it becomes obvious to readers that someone is willing to kill as many times as it takes for a secret to remain buried.

Tamar Myers' parents were missionaries; she grew up in the Belgian Congo. Her young American missionary, Amanda Brown, shows readers how difficult it could be to get used to the climate, the people, and the customs. In this book, Amanda has definitely become romantically involved with the police chief, Captain Pierre Jardin, and the natives who work for her-- Cripple and Protruding Navel-- are up to their usual tricks. Amanda is learning the language, she's learning the customs, and she feels as though she's becoming friends with Cripple, although there's still a lot she must learn from the wise little woman with the twisted back.

If you're looking for a traditional whodunit where the characters are actively out and about searching for clues, you're not going to find it here. The mystery, the clues, the resolution, all unfold gradually, naturally. Everything has been woven into this colorful fabric of story, and if one thread is pulled loose from the rest, the entire book suffers. Myers is skillful at her honest portrayal of the Congo during that era without becoming overly graphic, but it's the character of Cripple who shines brightest over this entire series of books.

If you've read all of Alexander McCall Smith's No. 1 Ladies' Detective Agency books, and are looking for something in the same vein, try Tamar Myers' books set in the Congo (The Witch Doctor's Wife, The Headhunter's Daughter, The Boy Who Stole the Leopard's Spots). I wouldn't be at all surprised if-- like me-- you prefer reading about Amanda Brown and Cripple!