The Sky Took Him by Donis Casey 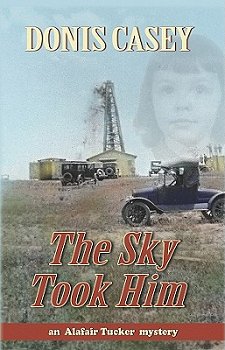 First Line: The train out of Muskogee was very nearly empty.

Alafair Tucker is going to Enid, Oklahoma, accompanied by her oldest and youngest daughters, Martha and Grace. Lester, the husband of Alafair's sister, Ruth Ann, is dying, and the family is gathering. When they arrive, Alafair learns that her niece Olivia's husband Kenneth has chosen a very inconvenient-- and thoughtless-- time to go on an extended business trip. When he doesn't return on the scheduled date, Alafair has a hunch that all is not well.

The hunch is proved correct: Kenneth is found dead. Everyone is convinced that the most ruthless businessman in Enid-- Buck Collins-- is responsible. So convinced in fact that the investigation begins and ends with him. But Alafair doubts that things could be as simple as that.

Once again, Donis Casey takes us back to Oklahoma in the 1910s, and with a family like the Tuckers, I always savor my visits. (Probably because the Tuckers remind me so much of stories I've heard of my own grandparents and great-grandparents.) Casey gives the reader a true feeling-- without going overboard-- of what life was like during that era. Although I loved the glimpses into a company dealing with early refrigeration units, Enid's Cherokee Strip celebration, and the work involved in drilling for oil, it's her characters, their behavior and their relationships from which I derive the most enjoyment in this series.

The Sky Took Him is no exception. We get to know Martha's beau, Streeter McCoy, but the stars among the new characters are Lu, a tiny Chinese lady, an oil man named Pee Wee Nickolls and his dog, Muddy. They stole every scene in which they appeared.

As each of Alafair's ten children grows to adulthood, Alafair has to get used to seeing them as grown-ups with adult feelings and reactions. I found this process with her oldest daughter, Martha, to be the most touching one so far. One scene toward the end of the book illustrates one of the strengths I find most compelling in Donis Casey's books. Martha has just been in a room with three generations of women in her family. After going upstairs, she happens to look in a mirror to check her hair:

The same face she had just seen on the women downstairs was staring back at her.

"It's like we're all the same woman," she said aloud. Suddenly, she was struck with the idea that she was standing at the very end of a long, unbroken line of women that went all the way back to Eve, all with one great soul, moving forward through time.


Yes, these books are excellent, with their tried-and-true recipes of the era, their depiction of a forgotten time, and their absorbing mysteries that Alafair insists on solving. But they're also for all of us who've ever looked into a mirror and seen a resemblance to a long line of men and women going all the way back to the dawn of time. We've asked the same questions for millenia: Who? What? When? Where? Why? and I love how Alafair Tucker answers them.

Genre: Historical Mystery, #4 Alafair Tucker mystery set in 1910s Oklahoma
Rating: A
Source: Purchased at The Poisoned Pen
by Cathy at Friday, May 11, 2012