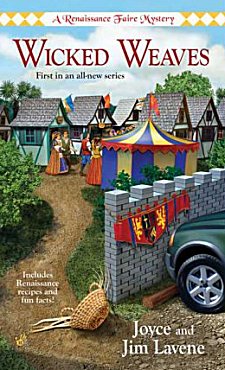 Assistant professor Jessie Morton spends every summer at the Renaissance Faire Village in Myrtle Beach, South Carolina, learning centuries-old crafts and working towards her Ph.D. This summer she's working with master basket weaver, Mary Shift, a woman whose secrets are as well hidden as her talent is amazing. When Mary's estranged husband is found in the village, murdered in broad daylight, suspicion falls upon Mary and shows no signs of shifting. Jessie, however, is convinced that the woman is innocent and is determined to find the real killer.

The setting of this book is marvelous. The Renaissance Faire Village is on an old airfield, and everyone lives by rather arcane rules and regulations. (For crying out loud, don't let Robin Hood and his Merry Men know that you just bought a new toaster oven!) With all the disparate types of people living and working there, it's Gossip Central and reminds me more than a little of a fictional New England village called Peyton Place. I also liked the misdirection in the plot that kept me from realizing the identity of the killer, and although I questioned having a basket shop in a Renaissance village that features Gullah baskets, I really appreciated learning a bit about both that style of basket weaving and the customs of the Gullah people.

I think what is going to make or break this book for readers is their opinion of the main character, Jessie Morton. I found her alternately irritating and endearing. She often bemoans the fact that she's got a shiftless twin brother who can't-- or won't-- hold down a job and is constantly trying to borrow money from her, but her brother isn't the only one who hasn't really grown up.

Jessie's love life occurs only in the summer when she's working at the Renaissance Faire Village, and as I read further and further I began to wonder if there was a male left in the village that she hadn't bedded. Of course there was: the bailiff as a matter of fact, smart and handsome Chase Manhattan. (All the characters in the book were used to the name and had stopped snickering.)

Although Jessie has to be around the age of thirty, she just plain doesn't act like it. When it looks as though Mary is going to be arrested for murdering her husband, Jessie lies and gives Mary an alibi-- then becomes upset when Mary doesn't thank her profusely. This isn't the only time she does this. Jessie is also the sort of sleuth who decides she doesn't like someone and then tries to pin the crime on that person. Since she tends to be a bit emotional, she can have a new suspect every thirty minutes or so. Yes, Jessie can have you talking to yourself, but she has real potential.

Now that the scene is set and Jessie is well and truly introduced, I'm looking forward to seeing what other crimes and misdemeanors occur in this very original-- and entertaining-- setting.