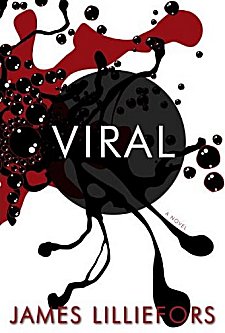 First Line: Cloud shadows carpeted the African countryside as a privately owned matatu rattled along the dusty lorrie route toward the capital.

In remote, impoverished areas of Africa, a deadly virus is moving through farming villages and shanty towns like a well-honed scythe leaving no survivors. The vaguest of rumors about this swirl through the rest of the world. Only a former CIA operative, Charles Mallory , with the help of his brother, investigative reporter Jon, seem able to put the clues together to learn that someone is putting plans into motion-- plans to create a new, technologically advanced society. Will the brothers be able to stop a bold and terrifying "humane depopulation" before it goes any further?

This book is not your typical thriller; there's a lot to digest in its pages. In a very real way, it's a two-pronged cautionary tale: telling us of what may happen if we keep ignoring the Third World, and of what obscenely wealthy people think they're entitled to do-- all in the name of "good". At its best, this cautionary tale can make your blood run cold.

But as a thriller, it doesn't quite run like a well-tuned machine. The cast of characters is too large, and they're scattered all over the place. It's difficult to get a fix on any of them and care what happens to them.

Of the two main characters, younger brother, Jon, is the more sympathetic. Jon hasn't really had any contact with his brother Charles in years, but Charles suddenly begins sending him riddles obliquely referring to their childhood that Jon is expected to decipher. Since his life depends on his decoding speed, it's good that Jon's up to the task. The scenes with Jon in Africa are particularly chilling and heartbreaking.

On principle, once I knew who the villains were and what their goals were, I detested them, but they were too shadowy for me to make that feeling personal. The villains just weren't "real" enough.

The pace of the book is also glacial at times. The author's story takes so long to put into place and is so detailed that I found myself wanting to put my foot down on the accelerator and speed things up a notch or two.

There are many things to like about Viral; when the scenes are in Africa, it can chill your blood and break your heart, but it never really involved me to the degree that it should have. I always felt removed from what was happening, and I really wanted to feel as though I were right in the middle of it all, fighting the good fight. All this being said, I have to admit that I am curious about any future adventures of the Mallory brothers. James Lilliefors is an author to watch.
by Cathy at Tuesday, April 10, 2012