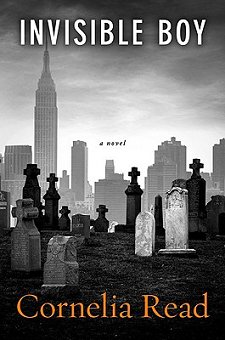 If you read that first sentence of Invisible Boy above, you probably already know whether or not you like the main character, Madeline Dare. And since I'm admitting that I love Cornelia Read's smart alecky character with a big, big heart, I've undoubtedly just admitted a lot about myself. So be it.

It's the early 1990s. Madeline and her husband have survived the Rust Belt and find themselves sharing a small apartment with friends in New York City. Maddie finds a job with little trouble, but it takes Dean a while to land a job with the husband of Astrid, one of Maddie's closest friends.

When Madeline agrees to help a relative resurrect an old family cemetery in Queens, she discovers the tiny skeleton of a badly abused three-year-old boy. Determined that justice be served, Madeline keeps in touch with police throughout the investigation and is a witness for the prosecution during the trial.

As the weeks go by, she finds herself examining her own life as well as the class and racial warfare that's being waged on the streets of New York City. Every step of the way she is helped by a colorful assortment of relatives, old friends and new acquaintances. Each one of these people represent an ingredient in the melting pot that is the City of New York.

I normally pigeonhole each book I review firmly within a subgenre, but once in a great while, I find myself inventing one because the book doesn't fit any of the existing ones. I call Invisible Boy "Noir-With-a-Heart" because Cornelia Read herself says that she writes noir. My take on "noir" has more to do with tough-talking private eyes who bed a different woman every night than it has to do with smart-mouthed softie Madeline Dare. Eh. While we're on the subject, why don't we just dispense with labels and say Invisible Boy is one damned fine piece of writing? Works for me!

This book basically is a slice of a few months of Madeline Dare's life from shortly before she discovers a child's skeleton in an old cemetery, through the ensuing police investigation, until the verdict is given at the end of the trial. During these weeks and months, we learn a great deal about Maddie, the types of people she surrounds herself with, and how Maddie views and participates in the world around her. We yawn a little while Maddie is at work, and we laugh more than a little when a defense attorney asks her how she got to be so good at stumbling over dead bodies.

But more than anything else, we come to realize that this isn't just about a tiny abused boy named Teddy who spent much of his three years on earth in fear and pain. This book, this Invisible Boy, is really about all the world's betrayed children who have no one to speak for them.

As you read the prosecuting attorney's closing statement, have a box of tissues at hand. Your heart will break. Yes... Invisible Boy made me laugh, it made me cry, it made me sick, and it made me angry. It is indeed Noir with a Heart.
by Cathy at Tuesday, April 17, 2012