The Inquisitor by Mark Allen Smith 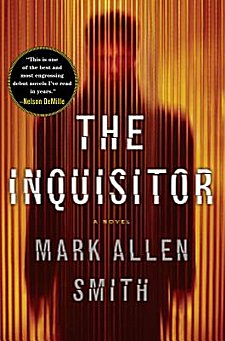 First Line: The client sat in an eight-foot-square room staring at a large one-way mirror that offered a view into flat, smooth darkness.

I can see many readers learning that this book is about a professional torturer and immediately deciding not to read The Inquisitor. They just might be making a big mistake because Geiger-- the main character in this excellent debut novel-- is one of the best characters I've come across in a long time.

Geiger is the best in the field of "information retrieval" (torture). What makes him the best is the fact that, while his competitors rely on physical pain to get the answers they're being paid to obtain, Geiger doesn't. He knows that the worst kind of pain is that of the mind. He also knows a lie the instant he hears it.  Add to that three facts: he has a strong moral code, a past that he doesn't remember, and one rule that he will not break: he will not work with children.

When a client insists on a rush job and Geiger learns that the subject sitting in the torture chamber is a young boy, he reacts quickly. He rescues the boy, hides him from his captors, and promises to protect the boy from harm. But in order to keep his promise, Geiger and his partner, former journalist Harry Boddicker,  have to find out why the client is so desperate to learn the boy's secret-- or Geiger, Harry and the boy will all face the very real possibility of death.

If you don't find the character of Geiger intriguing, you're probably not going to like this book. Fortunately I read every page of The Inquisitor and wanted more. Just enough of Geiger's childhood is revealed to help the reader understand why the character is the way he is-- and just what he might be willing to do to accomplish his goals.

Rescuing the boy is a trigger for his subconscious to begin revealing things that happened in his past, and while Geiger has all this to contend with, he's also got three killers doing everything in their power to find him, his partner, and the boy. It's all pretty serious stuff, but what takes this book above the usual thriller (besides a thinking adrenaline junkie's dream of a plot and a wonderful main character) are two of Smith's secondary characters.

Mr. Memz, Geiger's next-door neighbor, isn't your typical Vietnam vet. Memz gives us another opinion on the strange character called Geiger, and he certainly knows how to put his own stamp on the action.

In many ways, another secondary character, Harry Boddicker, is my favorite in the entire book, no matter how fascinating Geiger is. Yes, Harry has to check out Geiger's clients and keep the business running smoothly, but for most of the book's action, he's got his fragile, schizophrenic sister in tow. Harry's got to save himself, his sister, his boss, and a young boy-- and he attempts it all with class and with humor. If not for Harry's flip sense of humor in the face of disaster, The Inquisitor might have become too grim to bear.

With Harry's help, Geiger turns this book into something special; something I feel would transfer onto the big screen very well. And first-time novelist Mark Allen Smith does all this without writing a book that reads like a tarted-up screenplay. Bravo, Mr. Smith! Might we be seeing more of Geiger?